2023: I WANT A SUCCESSOR WHO WILL TREAT ME AS I TREATED AKPABIO – GOVERNOR EMMANUEL

…….Governor Udom Emmanuel has pointed out that he would love God to give him the kind of successor he had been to his predecessor in office. 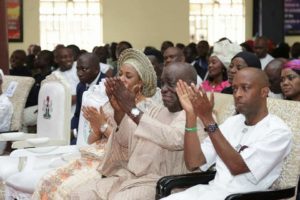 Mr Emmanuel who spoke when he worshipped with former President Olusegun Obasanjo at Qua Iboe Church, Uyo said, “I stand in the pulpit as a Christian to say, when it is my time, may God give me the kind of successor I have been to my predecessor.”

Apparently reacting to speculations that he may have been too hard against Senator Godswill Akpabio, Governor Emmanuel, attested that when he leaves office in 2023, he would be very happy to receive from his successor, the same measure of treatment he meted on his predecessor. 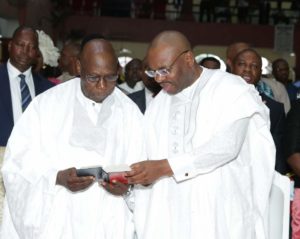 “The Bible says, in all these things we are more than conquerors. The Bible says in Deuteronomy, that the Lord would not hearken unto Balak, and all he meant for evil, God turned it into blessings for me.”

Describing Obasanjo as his Political father, Mr. Emmanuel predicted that his visit to Akwa Ibom, signifies more developments for the state and for the country. 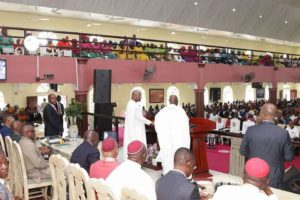 “I can say that the visit is a solidarity visit of a political father to his son.”

Speaking, former President Obasanjo said, Governor Udom Emmanuel has performed well and deserves to be re-elected to continue to do more.
“Children of God, we have a good product (Udom Emmanuel) and there is no need for change. He is a true child of God and he will fear not and will stand still, so please Akwa Ibom people continue to stand with him”. 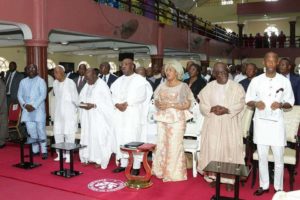 Obasanjo said he was in the state to congratulate the Governor for performing well, maintaining that, “we should be celebrating Good Leadership.

Chief Obasanjo said, “the prayer he has just prayed touched me, and you really have to be sure of yourself, you have to be a man of God, you have to be a Christian, a strong believer to be able to say, God, provide for me a successor that will do to me what I have done for my predecessor.” 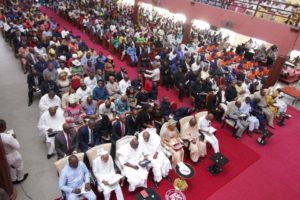 He labelled Governor Emmanuel as a good product, asserting that, “this is a good product, let’s have him for continuity.
Children of God, I can assure you, the Governor has no fear, he will stand still, please stand with him and he will take you to the Promised Land.”

Speaking on the theme: “Fear not, Stand Still”, Rev Ibup Emah urged people to desist from being derailed by fear.

He said that fear can reduce anybody to a status that Satan can easily conquer, adding that, “anyone who fears God has no reason to fear man.”

Defining courage as the resistance to fear, Pastor Emah said that despite the circumstance, God is always ready to fight the battle of his people.