The Vice President of Nigeria, Professor Yemi Osinbajo has lauded the efforts of Governor Udom Emmanuel in industrialization and has declared Akwa Ibom State as his second home.

During the commencement of commissioning of projects with the Flour Mill Factory in Onna as first, Mr. Osinbajo, who was impressed with the pace of growth in the state, congratulated Governor Udom Emmanuel for his governmental strides and described the Flour Mill factory as a product of foresight. 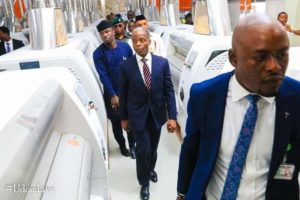 The Vice President who is in the State to inaugurate three landmark projects to mark the 32nd anniversary of the state’s creation, said he was satisfied with Governor Emmanuel for sharing in the vision of rapid transformation in the state.

“I want to commend the Governor for providing world class infrastructure and for attracting investors to this state. Your people are warm and hospitable and that’s why a lot of investors come here. I am from Ogun State, but whenever I think of a second home, I come to Akwa Ibom”. 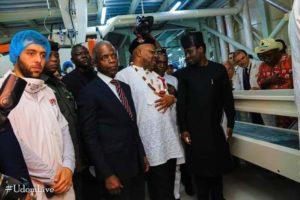 While welcoming the Vice President to the Flour Mill, Governor Emmanuel thanked Prof. Osinbajo for rising above biases, a message his administration has preached through the Dakkada creed.

In his words, “I thank you sincerely for choosing to be with us against all odds to commission these projects. Thank you sir for rising above biases, like we recite in our Dakkada creed. We share a common destiny, we share a common understanding that political party is just a platform for you to seek office. Once you are in that office, party drops and governance begins. 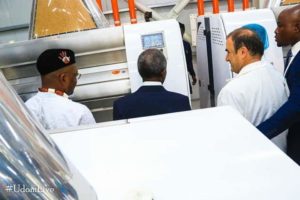 The State Chief Executive described the flour mill as a project anchored on development of the State, adding that the new industries are fulfillments of one of his campaign promises.

Mr. Emmanuel promised that “before the end of my administration, eighty percent of food we eat here would be what we produce here. Akwa Ibom State is going forward ever and backward never.

“There are some of us that came into politics, not for selfish interest but for the interest of the downtrodden. That is why, whoever we know on the face of the earth, wherever our a signature is recognized, wherever our email can be read, our duty to go out and bring those people to come and help us develop our place.

He added that the industries now dotting the landscape of the State, is another hope that students of Akwa Ibom State would no more travel to Lagos and Abuja for their educational and research projects.

“Before now, if someone had to write a project in our university, he had to travel to Lagos because he could do so. But now, that has changed, and before we leave office, all research and academic projects will be carried out here.”

The State Chief Executive maintained that he was not deterred by cynics who launch media attacks on his government, maintaining that, “people try to deter us but we are not distracted. When we started Ibom Air, they said it was the money we wanted to take out of the country. And that when they caught us, we were given the airplanes in exchange.

“That Ibom Air was a scam and will never take off. But when the airline took off, even the critics said well, this is a major breakthrough.

The Commissioner for Trade and Investments, Prince Ukpong Akpabio in his opening remarks urged the business community to take advantage of the peace in Akwa Ibom State for investment.

The Vice President subsequently commissioned the Lion Plywood and Timber Factory before proceeding to turn on the Digital Power Sub-Station at Ekim in Mkpat Enin local government area, where he launched the Power for All by December 2021, a scheme that the Governor said will see to the steady provision of electricity power to every household in the State at affordable rate.

The Vice President is on a two day visit to the State, and is expected to preach at the thanksgiving service to mark the state’s 32nd anniversary, holding at Ibom Hall Ground, Uyo.