IN THE NEWS‬: Our 53,000 votes intact for Gov Emmanuel, says Obot Akara people
***Donate 5000 hectares of land for agro-allied industry

……………….For fulfilling his promises to the people of Obot Akara, Governor Udom Emmanuel has earned the trust of electorates in the local government area who have collectively pledged to reciprocate his kind gesture with their votes.
At a campaign visit to the area Saturday, they revealed that 53,000 electoral votes domiciled in the area have been insured for his reelection as well as the success of other candidates of the PDP for various offices. 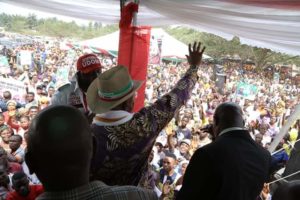 Setting the tone, the Paramount Ruler of the area, Okuku Uwa Umo Adiaka (III), who received the Governor and his entourage earlier at his palace pointed out that while the previous administration headed by their own son neglected Obot Akara for the eight year period of that government, it was Governor Emmanuel’s government that has wiped the tears of the people by fixing deplorable roads that connects the people of the area with neighbouring communities.
The royal father assured the Governor of the support of his subjects in his reelection bid. 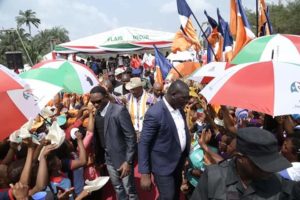 Speaking at the campaign ground at Nto Edino, a former Deputy Governor in the state, Engr. Dr. Chris Ekpenyong who is the candidate of PDP for Ikot Ekpene Senatorial District seat, described Governor Emmanuel as a promise keeper who has brought hope to the people of the area, assuring that they were ready to return the Governor for a second term.

The local government Chairman, Hon. Anietie Udo Udo in his remarks noted that the good works of the Governor in Obot Akara and indeed the entire state have spoken well of him, while the Chapter Chairman of PDP, Ekommemami Ukat described PDP as a religion in Obot Akara which cannot be changed by the people, and thanked the governor for giving governance a face in the state. 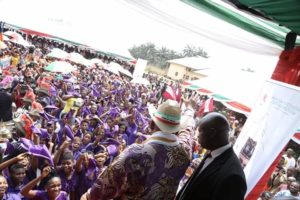 On his part, the Commissioner for Youth and Sports, Sir. Monday Ebong Uko told the Governor not to worry about Obot Akara, as the 53,000 votes in the area would be turned in for the PDP on election day. Uko declared that there was no other party in Obot Akara other than the PDP. 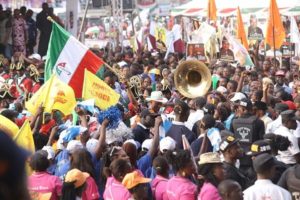 Others who spoke at the rally including, the DG, Divine Mandate Campaign Council, Otuekong Idongesit Nkanga and State Chairman of PDP, Paul Ekpo, thanked the people of Obot Akara for believing in Governor Udom Emmanuel and the PDP, and charged them to vote massively for all the candidates of the party and ensure they defend and protect their votes on election day.

Addressing the people, Governor Udom Emmanuel thanked them for the overwhelming support they gave him in 2015, and solicited for same support on March 2nd.
While listing his achievements in Obot Akara in the past three years, the Governor vowed to construct more roads in the area in his second term.
He commended them for providing 5000 hectares of land for the take off of an agro-allied industry in Obot Alarm, saying his administration remains committed to the development of the state.