………………The Akwa Ibom State House of Assembly, Thursday, held a valedictory sessions for Dr Clement Bassey who passed away recently at the age of 68. 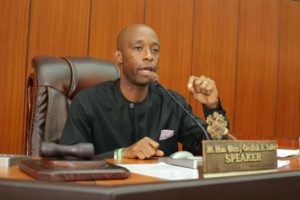 Just as the lawmakers earlier signed the condolence register shortly before plenary, the House observed a minute silence in honour of the deceased former lawmaker.

Dr. Bassey, who represented Ikono State Constituency, served during the Third and Fourth assemblies, between 2003 and 2011.

He was also a former chairman of Ikono local government area and a state commissioner. 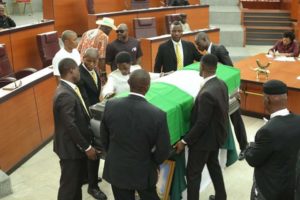 At plenary, lawmakers took turns to pay glowing tributes to Dr Bassey, with many of them describing him as a gentleman who truly loved Akwa Ibom State and gave his all for the development and success of democracy in the state.

Uko said that the late lawmaker was “a man that did not discriminate. I want to say that the man lying down before us here was a man that was too generous to many”.

The Speaker, Onofiok Luke, who presided over the session, described the late Clement Bassey as a bridge builder, and one who believed in the immutable power of God and the giver of all things.

He said, “the epilogues poured on Dr Clement Bassey is a testimony of the legacy which he left.

“He always did give free medical services as a medical doctor.

“When we wanted to come up with the state health insurance scheme bill, we reached across to Dr Clement Bassey because he had the philosophy that health financing should not be borne by the patients alone but spread across to government and employers.

“He contributed his wealth of knowledge that enabled us come up with that well crafted bill to make for health financing.

“He advocated universal health coverage. Service must be made the centrepiece of leadership and service is what Dr Clement Bassey represented”.

The House further adjourned to the 18th of December for consideration of the 2019 Appropriation Bill, earlier presented to the House by Governor Udom Emmanuel.