IN THE NEWS: ABOUT IBOM DEEP SEAPORT REALIZATION

………The commencement and completion of Ibom Deep Sea Port will certainly change the economy status of Akwa Ibom State forever.

The hitherto proclamation of the State as a Civil service State will be dead and the era of private Sector driven economy will rise . 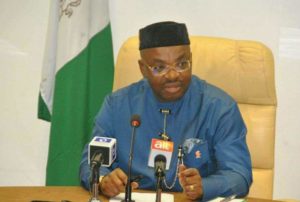 Governor Udom during his declaration to contest for the position of the chief Excecutive officer of the State made Ibom DEEP Sea Port a key project and his cardinal objective .

Leadership is not about making promises to win election , is about ensuring you fullfil your promises to the people .

Governor Udom Emmanuel is a leader with integrity and he is visionary in all his projection .
Akwa Ibom State today is second to lagos interns of attraction of foreign investment . So
With the coming Deep Sea Port , I see Akwa Ibom State ahead of Lagos .