………….For the family of Mr. Ndifreke Udo from Ikot Akpa Ekpuk village in Ikono Local Government Area, Christmas day will remain evergreen in thier memories as they not only gave birth to the 2018 Christmas baby who arrived at 1:58am, but were also lavished with love, cash and gift items by the wife of Akwa Ibom State Governor, Mrs. Martha Udom Emmanuel. 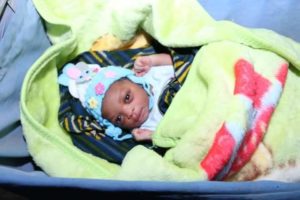 Mrs. Emmanuel paid an early morning visit to the General Hospital, Ikot Ekpene Local Government Area to welcome the male baby who weighed 3.2kg, said his arrival on Christmas day has ushered in more blessings for the family and the state at large.

The First Lady cuddling the Christmas baby also interacted with the mother; and prayed for God’s blessings upon the baby and his family. 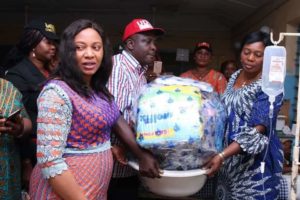 In her magnanimity, she gave out cash and gifts and as well paid hospital bills to other nursing mothers in the maternity ward.

While also welcoming their new bundles of joy to the world, Mrs. Emmanuel prayed that their babies would herald good tidings for their families
and the state especially as they arrived on a Christmas day.

Some mothers in the maternity ward who had delivered their babies but could not be discharged due to lack of payment of hospital bills, also received love as Mrs. Emmanuel donated cash and gifts items to settle their bills.

In appreciation, the mother of the Christmas baby , Mrs. Victoria Ndifreke Udo on behalf of other parents, appreciated the governor’s wife for her largess and show of love to her and other nursing mothers, praying that God will bless her and reward her.

Responding on behalf of the nursing mothers whose hospital bills were settled by the Governor’s wife, Mrs. Ubong Udokang, a mother of twins, thanked the Governor, Mr. Udom Emmanuel and wife Martha for their liberal benevolence this yuletide, praying God to reward their labour of love.

Also speaking, the Doctor-on-call Dr. Uwakofon Ekpoudom, in his appreciation thanked Mrs. Emmanuel for visiting and donating to the nursing mothers this Christmas season and as well prayed God to bless her and replenish her good works.