IN THE NEWS: Akpabio, other Defectors Are Cowards – Emmanuel Enoidem

…………….PDP National Legal Adviser, Barr. Emmanuel Enoidem has described a former governor of Akwa Ibom State, Senator Godswill Akpabio and others who defected to the All Progressives Congress (APC), as cowards. 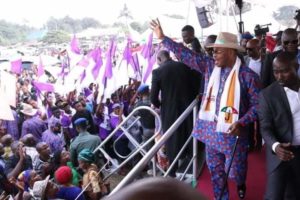 Enoidem who was speaking at the governorship campaign rally of the PDP at Utu Etim Ekpo Sports stadium on Friday, said the former governor had said in 2014 that those who carry broom are houseboys, as broom represents servitude.

In his words: “Someone told us that broom is for slaves and a sign of servitude. But before the cock crow, they had paid flight to London and applied to carry the same broom.”

Enoidem who mocked the APC over their campaign in Etim Ekpo on Thursday, said the party only wandered past the area. Said he: “Yesterday (Thursday), the APC wondered around here in the name of campaign rally with strange and imported fellows. But Etim Ekpo are here today. This is Etim Ekpo for you. Etim Ekpo has always been PDP from 1998. PDP owners are here. Only foreigners are the one’s who left.” 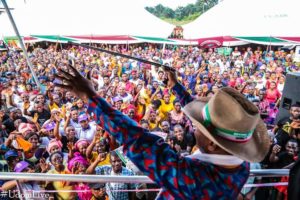 The former Commissioner for Special Duties who said the forthcoming elections will be a referendum, noted that Mr. Udom Emmanuel will serve as governor for eight years just as Victor Attah and Godswill Akpabio did.

“In 2014, Akpabio said Attah went for 8 years, himself did 8 years, and therefore his successor, Governor Udom Emmanuel, will go for 8 years. He said the same thing even till 2018. Therefore, his summersaults means lack of integrity. Udom Emmanuel is worthy of re-election and his second term is not for free but borne out of competence and superior performance as he has fulfilled all his 5-point agenda he promised Akwa Ibom people in 2015.” 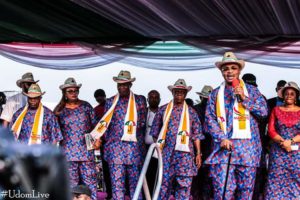 Barr. Enoidem assured the governor of victory come March 2nd, stressing that the PDP will win with landslide votes as has always been the case since 1999, adding, “only those who have already failed election are busy writing petitions to the police in the name of Warsaw saw Warsaw. “Woe unto anybody who plans bloodshed and death on election day.” 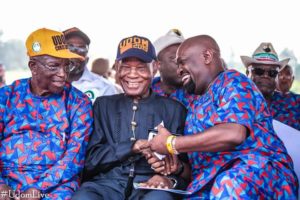 Maintaining that APC will be defeated at the polls, he said: “I fear no one. They will see me and this election, and they will fail come February 16 and March 2nd.”

He urged the people to reject Buhari at the polls and vote for Atiku Abubakar.

“No time in in the history of this country has we recorded such large number of killings, not even in the military era. The country has suffered under Buhari. Nigeria has become the world capital of poverty because of Buhari. The presidency is not a sickbed but a very demanding office that shouldn’t be given to a sick person,” he remarked. 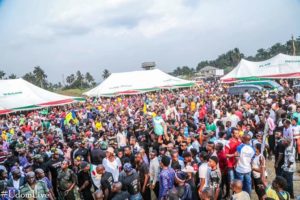 Addressing the enthusiastic supporters, Governor Emmanuel thanked the people for their show of support and the warm reception given him.

He said he’ll continue to place emphasis on the welfare of the people, while also paying attention to renovation of schools, road construction and lots more. He pledged to do more for the people of Etim Ekpo in his second term in office.

Governor Emmanuel said his priority will also be in the youths, adding that he’s committed to providing employments for them.

The governor who said that the PDP stands for peace, progress and prosperity, called on the people to vote for Atiku Abubakar, noting that the former Vice President will provide jobs for them.

He said he will remind the people of Etim Ekpo of the promises he has made to them when he comes to inaugurate most of the projects he has promised to site in their domain. “When we come for commissioning, I’ll remind you of my promises today,” he noted.

On his part, Chairman of Etim Ekpo local government area, Hon. Udeme Eduo, commended Governor Udom Emmanuel for restoring peace in Etim Ekpo, adding that if not for the governor’s intervention, “we wouldn’t have come here; there would have been no school; women wouldn’t have gone to the market. Because of what you’ve done for us, schools are back in session, market is open and people are buying and selling. We know you’ll do more in your second term. Etim Ekpo loves you,” he said.

Chief A. S. Akpan said Etim Ekpo will deliver the governor at the polls as they did in 2015. He noted that the people of the area have resolved to return the governor to the Hilltop Mansion, adding that it is based on the governor’s performance in office and the need to give the youths a bright future that they are supporting his re-election.

“What we’re doing today is to protect the interest of our youths and unborn children. We’re here to protect our integrity. You’ll serve eight years as others did. You’ve done great things in Etim Ekpo, and we love and respect you.”

Speaking on behalf of the women, Mrs. Ima-Abasi Jimmy, said the women will give the governor 100 percent votes and also do the same for Atiku Abubakar. She said the women are not only steadfast in their stance, but unafraid of anybody.

Godson Uwah who spoke for the youths told the governor that he has no problem in Etim Ekpo, stressing that the youths will give him 100 percent votes. Describing Etim Ekpo as a PDP enclave, he said the youths are not cowards hence will stand firm to ensure victory for the governor and other PDP candidates at the polls.

The state chairman of the PDP, Obong Paul Ekpo, who presented flags to the party’s candidates in the forthcoming elections, also received APC defectors into the peoples Democratic Party.