IN THE NEWS: CRACKS IN A/IBOM APC AS UMANA UMANA’S MEN RETURN TO PDP

*WE HAVE TWO FACTIONS, THE REAL APC AND THE FRAUDSTERS -UDOEDGHE

……………The internal crises within the All Progressive Congress in Akwa Ibom State has reached a new level. Recent developments reveal that members loyal to the erstwhile Governorship candidate, Obong Umana Umana are aggrieved and have decided to return to the Peoples Democratic Party, PDP. 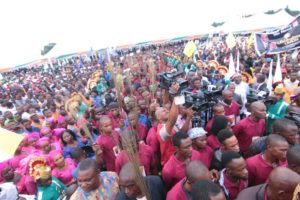 The latest move by the Campaign Director of UOU, Chief Sunny Udom is one of several moves by the UOU’s men to the PDP. Earlier, Prof Nse Akpan, Otuekong Anietie Ekong,  the APC woman leader, former commissioner, Effanga, several others had moved to the PDP on the instructions of their political leader.

Chief Udom in a heavy worded speech at his defection on friday said the APC as a party is finished in Akwa Ibom State.

“Out of the 50,000 people in this stadium, 20,000 followed me, it is not easy. The party that I belonged, the APC, there is someone they chose and all of them don’t like him, but are following him because the person deceives them with contracts. The issue is that two weeks ago,  I and the deputy Governor, we were in one church. Then Nsima Ekere came and said that he will open up a small road for that community in Oruk Anam. Nsima Ekere knelt down for everybody to pray  for him since he wants to be Governor in 2019, but the deputy Governor and I knew who will be the Governor in 2019, we did not join to pray for Nsima. The head pastor asked why I did not stand up to pray like others and I said that I prayed but this is what I prayed. 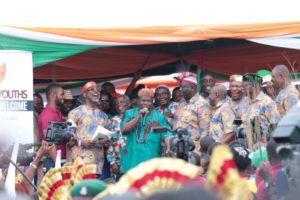 ‘While some others were praying that Nsima Ekere will be the Governor in 2019, I prayed to my God as well. I called Jehovah 7 times ,  and He answered me, and I said please Lord do not answer what these people just prayed. And I said please God have you heard what I said and God said He has heard, He said accepted, I should consider it done.

Today that I came, I came with these people, and they are many. I commend the youths and those that helped me get here.

‘I brought these people, I came from APC; APC does not have a candidate, I was the Director General of their Campaigns and I know that their house is not in order, because they forgot people who worked and laboured to make APC what it is.

We heard about change but the change turned out to be from frying pan to fire. At least let us come back to the frying pan, the umbrella is a very good symbol for those who know geography you know that there is something called Ozone Layer, which the umbrella can cover; but we discover that the way they use the broom, first of all not to sweep the floor but to clear the ozone layer, such that the sun that has come on us now is so unbearable, apart from that we discover what many people did not know, the broom is what witches carry. Recently, you outlawed cultism in the state. I expected you to outlaw witchcrafts, but it is like you spared the witches because their party is in control at the center. But we wish that when you come back in the second term, you will do the needful.  Continue what you are doing and since you are a person of peace. Let peace reign” Udom added.

Meanwhile, the faction loyal to Senator James Akpan Udoedeghe have said that they are the authentic members of the APC and that the NDDC MD and his clique are pretenders.

In a statement released by Udoedeghe’s spokesmen, Thomas Thomas and Solomon Johnny, they say that genuine party men should shun Obong Umana and Nsima Ekere.

“Akwa Ibom people should wake up to the fact that they should not be taken for a ride anymore. The APC consists of two factions; one consisting of original opposition Party members from all the Legacy Parties that ever opposed the PDP; and the second, consisting of decampees from the PDP, who are in the APC to safeguard their interests and that of their Party (the PDP); and stop the manifestation of the true APC (or opposition spirit). Their duplicity should disqualify their integrity.

We urge all genuine opposition party members to rally behind the genuine APC, with opposition interests, because this is the camp that is in true opposition to cultism and gangsterism; lawlessness and impunity; and the unbridled excesses of political officeholders.

We are certain that if well-meaning citizens of our State rally behind the true APC, then our State will have succeeded in enthroning credible representatives with genuine collective ideology for societal recovery and advancement”.