. . . Sues for cooperation from host community

Addressing the guests during the inauguration, at the school premises in Ikot Ntuen, Oruk Anam Local Government Area, Governor Emmanuel charged the host community on maximum cooperation to achieve the needs it was established. 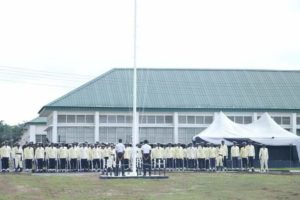 The Governor, who was the Special Guest of Honour, commended members of the host community for their friendly disposition so far, urging them to protect the institution as an important asset of the federal and state governments and expressed delight that the inauguration coincided with the celebration of the third anniversary of his administration.

“Let me thank the community and also charge you that I expect maximum cooperation from you because this school belongs to Nigeria and Akwa Ibom State. This is an asset you need to protect. They have this kind of institution everywhere in the country but let this one be exceptional for quality, cooperation and prosperity”, the Governor stated. 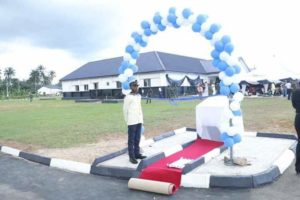 Emmanuel appreciated the Nigerian Navy, particularly, the Chief of the Naval Staff, for partnering the Akwa Ibom government in siting the school in the state, noting, “With this latest addition to existing Airforce and Police Command schools as well as the Army Command which is undergoing admission of students, we have completed the circle of military educational institutions”.

He remarked that the Nigerian Navy has numerous attested profile of quality in rendering services and displaying discipline worthy of emulation by the political class, adding that with the seriousness witnessed among the pioneer students, the school was on the path of being adjudged as another institution of repute in Africa.

While hoping to continue partnering the Navy in putting up more structures in future as may be required from the master plan of the school, the Governor said that the state government has so far assisted in the construction of classroom blocks, Assembly Hall, Dining and Kitchen, Boys and Girls Hostels, Library, Staff Room, Water Installation and Electrification.

The State Chief Executive applauded the initiative of the Nigerian Navy at giving a face-lift to the moribund naval hospital in Calabar, the Cross River State Capital, adding, ” I heard it is now one of the best navy hospitals in this region. I feel so proud to associate with the present crop of Service Chiefs because these are people who are given to development”.

In his remarks, the Chief of the Naval Staff, CNS, Vice Admiral Ibok-ete Ibas, noted with delight that the inauguration of the school was auspicious through a long standing relationship between the Nigerian Navy and the Akwa Ibom State Government, stressing that it was a reflection of shared harmony from a unique blend of like-minds in the service of the country.

Vice Admiral Ibas said that the establishment of Nigerian Navy footprints in Akwa Ibom dates far back before its creation from the then Cross River State with a long line of key corporate institutions for Navy operations, explaining that the various Naval installations have aided direct regimentary training of merchant cadets and the general patrol of waterways within the state.

He acknowledged that the Nigerian Navy has further boosted the cordiality and understanding with the Akwa Ibom Government by staging major conferences, sports fiesta and other important events, in the state, maintaining, “the Navy has been able to undertake all these because of the tremendous support it receives from government and people of this benevolent state”.

The CNS stated that the Nigerian Navy was indebted to Akwa Ibom State Government on the various efforts of funding its projects and programmes, mentioning that the inaugurated Navy Military School, was the latest of impressive result of synergy and collaborations it has established with the state government.

Ibas assured that the school would also strengthen the security apparatus of the Navy and meet the yearnings of the state to broaden naval services, commending the gesture of Akwa Ibom State Government on the release of the premises for the operation of secondary education and training of youngsters who may eventually desire a career in naval service.

He seized the opportunity to appreciate President Mohammadu Buhari, for approving the establishment of the school, and the people of Akwa Ibom State, imploring the host community to remain in cordiality with the school, while nurturing and protecting the facilities.

Also speaking, the Chairman, Senate Committee on Navy, Senator Isah Misau, lauded the Akwa Ibom Government on the feat of carrying out massive Inauguration of projects in the state, recalling that he has visited the state on well over 50 occasions to witness commissioning of different projects and maintained that Akwa Ibom and Cross River States are synonymous with inauguration of projects.

He congratulated the state government and the Nigerian Navy for the establishment of the school, particularly commending the Navy for their efforts at instilling excellence in the education sector and added, “with the kind of Primary and Secondary Schools as well as Universities of the Nigerian Navy, it is obvious that they have a lot to offer in terms of rescue and quality education”.

The event, which was spiced up with cultural displays, culminated in the unveiling of the plaque commemorating the inauguration and hoisting of commissioning pennant by Governor Emmanuel as well as cutting of the inauguration cake by the Governor, assisted by his wife, Martha and other top brass military officers.