…………As the Divine Mandate team took its tour of campaigns against the upcoming general elections, to Ini Local Government Area, Governor Udom Emmanuel has promised to further give a facelift to the area through road construction and establishment of a cottage hospital in the next political dispensation. 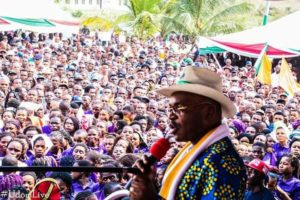 The Governor, accompanied by his wife, Martha and his Deputy, Mr. Moses Ekpo, made the promise while addressing jubilant crowd of supporters during a rally at the Council Secretariat, Odoro Ikpe.

Emmanuel specifically hinted that the construction of Itu Mbon Uso – Nkari Road with a spur, leading to the Palace of the Paramount Ruler, would commence immediately after the gubernatorial election, adding that development programmes in other sectors, including education, will also be pursued.

He acknowledged that his administration has fulfilled promises of impacting on the communities in Ini, recounting some of the development projects executed in the Local Government by his government and particularly made reference to the provision of electricity, road construction and establishment of agro-allied factories.

The Governor reteirated that just like in his first term, the Local Government will be fully accommodated in the scheme of things in his second term, to continue addressing the many years of neglect of the area, soliciting for 100% votes for all candidates of the Peoples Democratic Party, PDP. 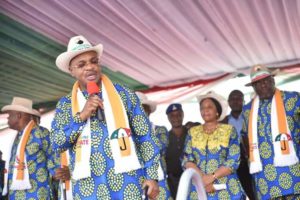 In their separate remarks, the State PDP Chairman, Obong Paul Ekpo and the Director General of the Divine Mandate Organization, Otuekong Idongesit Nkanga, appreciated the people of Ini for their faith in Governor Emmanuel’s government, assuring that when returned for a second term, the Governor will perform more than he has already done.

While calling for votes to secure the victory of the PDP at the polls, they affirmed that the Party’s Presidential Candidate, Alhaji Atiku Abubakar, has a blueprint that will transform the economy of Nigeria, adding that education and agriculture will be given required attention in his administration.

Speaking on behalf of the women in a goodwill message, the State Commissioner of Women Affairs and Social Welfare, Dr. Glory Edet, said that the women have many reasons to resolve on re-electing the Governor for a second term, noting that it is in the present administration that the area was experiencing the impact of governance for the first time in many years. 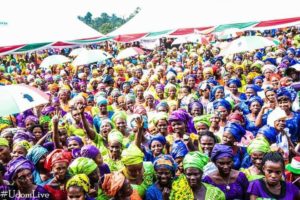 Dr. Edet, who hails from the Local Government, stated that the construction of Ikpe Ikot Nkon – Arochukwu Road, by the Emmanuel administration, has enhanced economic activities in the area, commending the Governor for taking over community schools in Ini to enable provision of free, compulsory and qualitative education to the pupils and students.

Chief Bassey Inuaeyen, who spoke for the Elders, said that the people of Ini are appreciative of the Governor’s magnanimity in the provision of infrastructure in the area, recalling that most communities were without electricity for many years but the situation changed when Emmanuel assumed duties as the State Chief Executive.

Also Speaking, a former State Legislator, Rt. Hon. Ukata S. Akpan, described the Governor as a man of integrity, acknowledging that Emmanuel has attained a feat in Ini that no State Executive in past administrations, have achieved.

Àlpan said that the people of Ini have voluntarily accepted to identify with the Emmanuel-led ladministration for two terms of eight years, emphasizing that they will support the zoning arrangement which allows a Governor to lead for two consecutive terms.

Earlier, the Chairman of the Local Government, Hon. Israel Idaisin, noted that the Governor is already a popular candidate in Ini with the record of development projects initiated and executed by his administration, saying that the people will demonstrate their appreciation at the polls.

Hon. Idaisin expressed appreciation to the Governor for the development witnessed in the Local Government through his administration, pointing out that the rice mill in Ini, was real, contrary to negative propaganda by the opposition and stressed that the Governor has changed the system of the area.

The PDP Chapter Chairman, Hon. Emmanuel Umah and a Youth Leader, Comrade Ekomobong Iseh, assured of block votes for the Governor at the gubernatorial elections, maintaining that the victory of the PDP at the polls will be the reward for the Governor’s life-touching projects in their locality.

Highlights of the rally were the presentation of PDP flags to aspirants under the Party by the State Party Chairman and the formal reception of a serving ward chairman in Ini APC Ward 2, Ndianabasi Edet Ibanga, who defected with several others, to join the umbrella Party.

Prior to his arrival at the venue of the rally, Governor Emmanuel had received royal blessings from the Paramount Ruler of Ini Local Government Area, who is also the Chairman of the State Traditional Rulers Council, HRM Edidem Ntoeng Udo Effiong Akpan, when he visited to pay homage to the Monarch and his cabinet members.