…………….Governor Udom Emmanuel has re-echoed his desire to eradicate kidnappers and rapists from the state, suing for maximum support from the judiciary in this direction. 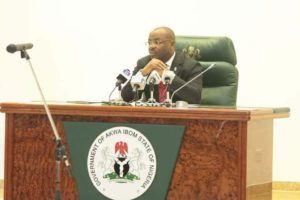 Governor Emmanuel appealed to the Chief Judge to work with the Attorney General on the training of the police and other related personnel on the art of evidence. 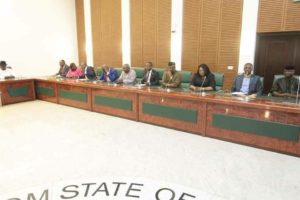 He said so many kidnap suspects are let off the hook because, “by the time we call for evidence, we don’t see anything, you don’t also want to rubbish your profession. You must decide the case based on what you have before you.”

He said the courts need to be strict on kidnap and rape suspects because that is the only available avenue for justice, adding that such heartless people need not be allowed to escape the weight of the law.

He also called on other care givers like teachers to step up the enforcement of discipline in schools, positing that once there is no discipline in the society, more work comes to the judges. 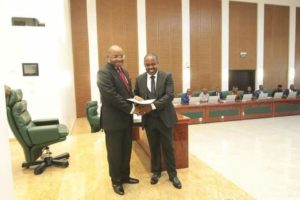 The Governor congratulated the two new judges on successfully emerging through what he described as a tedious process, maintaining that their promotion is a “function of the sound legal mind that you people have and you are bringing to the table of justice.”

He said that Akwa Ibom State parades some of the best legal professionals in the country, and expressed the hope that the new lawyers will live up to the billing in the state.

Mr Emmanuel reminded them that their emergence is at a time the state is adjudged very peaceful, and charged them to be ready to defend the challenges they may encounter.

“People say the state is peaceful, it’s because we have zero tolerance for any act of criminality.”

He commended the Chief Judge of the state, Justice Godwin Abraham for the innovations he has brought to the judiciary, alongside the efforts of his predecessors. 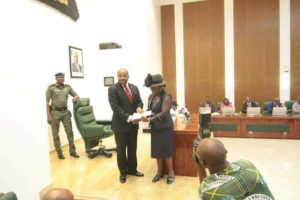 In their separate interviews shortly after being sworn in, they promised to do justice in a manner that the common man, the non-learned persons will appreciate that justice has actually been done, and pledged to deepen the integrity ratio of the judicial system in Nigeria.

Chief Magistrate Uwem Peter Ibritam hails from Akai Ubium, Nsit Ubium in 1966, and attended University Of Cross River State and the Nigerian Law School from where she was called to bar in 1991.

She was appointed Magistrate Grade 1 in 1995 and served in different categories in the Magistracy.

Married with three children, she has been a member of the Senior Staff Management Committee of the Akwa Ibom State Judiciary and also Vice President of the Magistrate Association of Nigeria, AKS Branch.

Barr. Bassey Nkanang hails from Ikot Eko Ibon in Onna and was called to the bar in 2002 having studied law at the University of Uyo and the Nigerian Law School.

Until his appointment, he had been involved in active and uninterrupted legal practice, and once served as the President General of the highest youth movement among his people, the Afigh Iwaad Ekid.