IN THE NEWS: Gov. Emmanuel To Build Development Centre In Mkpat Enin 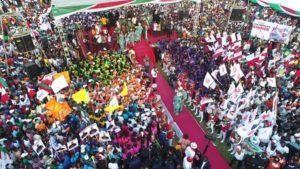 Mr. Emmanuel said the project which will be built by Exxon Mobil in partnership with the state government will be sited in Ikot Akata.

The governor made the pronouncement while addressing a mammoth crowd in Mkpat Enin on Thursday when he took his re-election campaign to the area.

Governor Emmanuel who thanked the people for turning out en masse to the rally, observed that his administration has done a lot in Mkpat Enin especially in the area of road construction, the Coconut plantation, refinery, power sub station at Ekim and lots more, said his second term will bring more prosperity to the area. 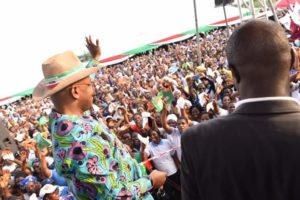 The governor said that 60 percent of employees at the Coconut Plantation are indigenes of Mkpat Enin. Assuring the people of his administration’s commitment to improving the quality of education in the area, he reminded them that all courses at Akwa Ibom State University, Ikot Akpaden, has been accredited.

The Chairman of Mkpat Enin local government area, Mr. Ekanem Brown, said the day was not for campaign, but a day to thank the governor for all he has done for the people of Mkpat Enin. 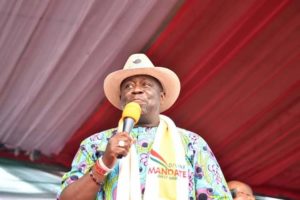 He commended Governor Emmanuel for creating employment for the youths, adding that since the creation of Akwa Ibom, Udom is the only governor that has done so much across the state.

The council boss, also had kind words for the governor for building a power sub station in Mkpat Enin, stressing that the project has given them the fillip to commence a shoe factory in the area “knowing full well that we’ll have constant power supply.” He assured the governor of victory at the poll. 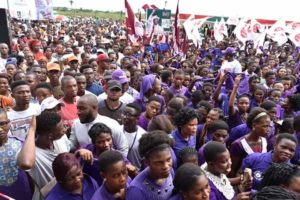 He pointed out that Mkpat Enin is not ready to yield its place as the LGA with the highest number of votes as was the case in 2015 in next month polls. He said they’ll maintain the lead and give the governor massive support to ensure his victory on March 2nd. 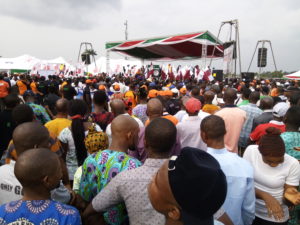 Barr. Sampson who commended the governor for making Mkpat Enin the hub of Akwa Ibom State, noted that federal might will not work in the area in the forthcoming elections. He assured the governor that mkpat Enin will use their numerical strength as usual to hand him victory on March 2nd.

PDP chapter chairman of Mkpat Enin, recalled that the people voted for Governor Udom Emmanuel in 2015 on account of his profile, noting that the governor has transformed the votes given him in 2015 into seeds of development.

Observing that the seeds have led to what he described as an upswing in the socio-economic life of the people of Mkpat Enin, he said they’ll vote for the governor in order to enjoy more democratic dividends and sustenance of the peace and prosperity brought by Governor Emmanuel.

In their separate remarks, Hon. Emem Alex, Mrs. Brown Ekanem and Mr. Jerry Akpan all commended the governor for his good works in Mkpat Enin especially the ICT centre at Secondary School, Minya. They promised to give their votes to the governor on election day.

Chairman of the PDP in the state, Mr. Paul Ekpo who handed over flags to candidates of the party contesting for various positions in the upcoming elections, also received 720 members of the All Progressives Congress (APC) including 7 ward chairmen and chapter executives.