IN THE NEWS: GOV. UDOM ENCOURAGES YOUTH TO BUILD CAREER IN SPORTS 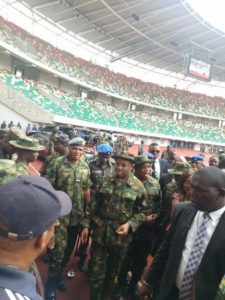 His Excellency, Gov. Udom charged youths to take advantage of facilities in the State to develop passion for sports because it is a lucrative venture both in the national & international scene.

Gov. Udom commended the Chief of Air Staff, Air Marshall Sadiq Abubakar for choosing Akwa Ibom State for this year’s competition. As the chief host, the Governor promised them a peaceful stay while enjoying the warm hospitality of our dear State.

The Special Guest of honour at the event was Governor of Cross River state, Prof. Ben Ayade who was represented by his deputy.

In his speech, the Chief of Air Staff, Air Marshall Sadiq Abubakar praised Governor Udom for developing the State & making Akwa Ibom a choice destination. The Air Force Chief expressed gratitude to Gov. Udom for being a promoter of sports & youth development.