…………..It was a day of great excitement for youths as Governor Udom Emmanuel took time to fete youths of Akwa Ibom state in the three senatorial districts of the state.

The Governor, who was accompanied by his Deputy, the Speaker of the State House of Assembly, Federal and State lawmakers and State Executive Council members toured the three senatorial districts with largesse for all the youths in his usual end of year get together fiesta. 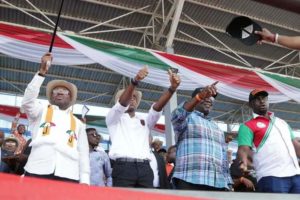 Mr Emmanuel assured the youths in the separate fora of a sustainable economic development and empowerment for future leadership in the state and country.

The state Governor thanked the youths for their support and sued for more in the coming year to ensure victory for the PDP and his continuity in office come 2019.

He reiterated commitments to the industrialization of the state to create wealth and employment for the teeming youths. 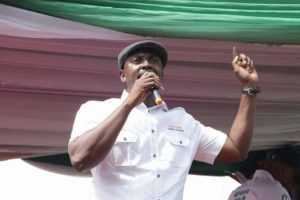 Governor Emmanuel who first addressed a mammoth crowd at the CKS Primary School, Uyo, said any nation that fails to plan for the future generation is doomed, saying that youths are the vanguards of the future and charged the youths not to mortgage their future to merchants of economic backwardness, whose quests for power is for self aggrandisement.

He said that Akwa Ibom is a PDP state and urged the youths to remain steadfast, vote and protect their vote.

The Senior Special Assistant to the Governor on Youths matters, Comrade Aniefiok Iwaudofia, expressed appreciation to the Governor for showing the youths how to fish and also giving them an enabling environment to grow. 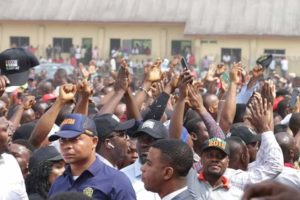 The Commissioner for Youths and Sports, Sir Monday Ebong Uko expressed appreciation to the Governor for a torchbearer of honesty, good governance and peaceful disposition.

He assured that the youths are for the PDP and they would do justice with their vote for continuity. 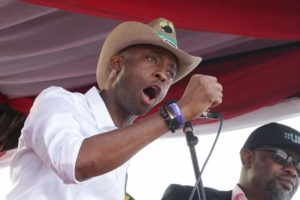 The Speaker, AKHA, Barrister Onofiok Luke urged the Youths to stand up for the truth and support Udom Emmanuel complete his 8 years tenure for equity and for the state to harvest more of Governor Emmanuel’s Economic blueprint via industrialization.

Senator Bassey Albert cautioned the Youths to be wary of those who promise them candy only to use them for their selfish desires but to stake their future on the Divine Mandate with Governor Udom Emmanuel as the driver.

The State PDP Chairman, Obong Paul Ekpo said that he remains a PDP member and harboured no plan to jump ship as propagated by the opponents desperately seeking the soul of the state for vain glory.

The DG, Divine Mandate, Otuekong Idongesit Nkanga, expressed delight at the massive turn out of the youths at each of the senatorial districts and charged them to hold on to the umbrella for a sustained future as against the propaganda which the opposition is known for, and their knack on intimidation using security agencies.

Nkanga charged the Youths to be resolute and not allow themselves to be cajoled by APC’s falsehood and lack lustre agenda.

At Ikot Ekpene Township Stadium, the Youths adorned in various colours affirmed their support to the PDP led administration of Governor Udom Emmanuel.

The Deputy Governor, Mr Moses Ekpo, appreciated the Youths of the district for identifying with Governor Udom Emmanuel and the PDP.

He said any attempt to derail the zoning principle will jeopardise the political equation and urged the Youths to stand firm in defence of the truth for Governor Emmanuel to accomplish the Eight years tenure as his predecessors.

The National Legal Adviser, PDP, Barr. Emmanuel Enoidem, said that leadership is not a right but a privilege and the decision by their brother and the former Governor, Senator Godswill Akpabio, does not go down well with the people of Ikot Ekpene Senatorial District in the PDP. 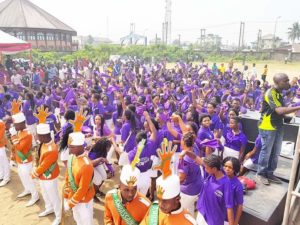 This has made them to part ways saying that as men of integrity, they are not given to doublespeak.

The National Legal Adviser said they do not need any prompting to support Governor Udom Emmanuel and decried the statement made by their brother and former leader, Senator Godswill Akpabio, attempting to desecrate the seat of Governance he had previously sat.

Barrister Enoidem, reasoned that followership is not slavery and as such, they are entitled to their decision rather than following him blindly.

He assured Governor Udom Emmanuel of the People’s trust and confidence in his pragmatic leadership.

Youth leaders in Ikot Ekpene, including the Commissioner for Investment, Commerce and Industry, Prince Ukpong Akpabio, Prince Ikim, Mr Anthony Luke said that they will swim and soar with the Peoples Democratic Party, PDP, being the only party that holds a future for the youths.

They said that they would remain loyal to their Inlaw, Governor Udom Emmanuel and ensure his continuity in office.

According to the Youth Leaders, the shortcut to Governorship after Uyo is for Governor Emmanuel to complete the second tenure.

They posited that they had aligned with the power equation on zoning and wondered why few selfish individuals would want to truncate that of their turn with their son on the saddle and pledged their total loyalty with the Governor and the PDP.

This was the position canvassed by the Chairman, State Youth Council, Barr. Theodore Williams.

The Senatorial candidate of the PDP, Dr Akon Eyakenyi affirmed the readiness of the Youths of Eket Senatorial District to galvanize their support for the success of the PDP and continuity in office of Govenror Udom Emmanuel.

Highpoint of the events at each of the senatorial districts was the presentation of all the candidates on the platform of the PDP to the people by Governor Udom Emmanuel.

There were merriments, festivity and celebration in the air at the separate venues.