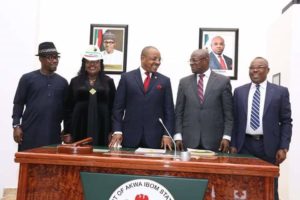 The brief ceremony at the Exco Chambers of Government House followed the presentation of the approved bill by members of the Akwa Ibom State House of Assembly, led by the Deputy Speaker, Mrs Felicia Bassey and the Chairman of the Appropriation and Finance Committee, Dr. Usoro Akpanusoh. While the Attorney General of the State and Commisioner for Justice, Barr. Uwemedimo Nwoko and the Commissioner for Finance, Nsikan Linus Nkan witnessed the signing of the budget.

Briefing Government House Correspondents, the Commissioner for Finance, Nsikan Linus Nkan said that the Budget christened “Budget of Industrialisation for Poverty Alleviation” is intended to actualize the Industralization and Job Creation Agenda of the present administration.

The Finance Commissioner who scored Governor Udom Emmanuel high on the implementation of the 2018 budget said the 2019 budget is expected to draw strength from the Internally Generated Revenue and other consolidated allocations.

Also speaking, the Commissioner for Education, Prof. Victor Inoka said that the State Governor has granted approval for the College of Education to be a degree awarding institution.

He said that the College Of Education is now affiliated to the University of Uyo and listed some of the approved courses to include: Education Agriculture, Education English, Early Childhood and Primary Education, Education Chemistry, Education Biology, Education Physics, Education Mathematics, Technical Education, Integrated Science, Business Education and Social Studies all in Faculty of Education. 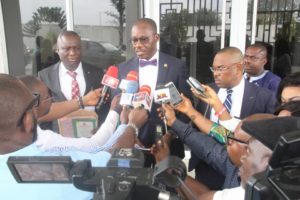 Setting the tone earlier, the Commissioner for Information and Strategy, Mr Charles Udoh said that the Executive Council presided over by Governor Udom Emmanuel deliberated on a number of issues being the first enlarged Exco meeting after the elections. 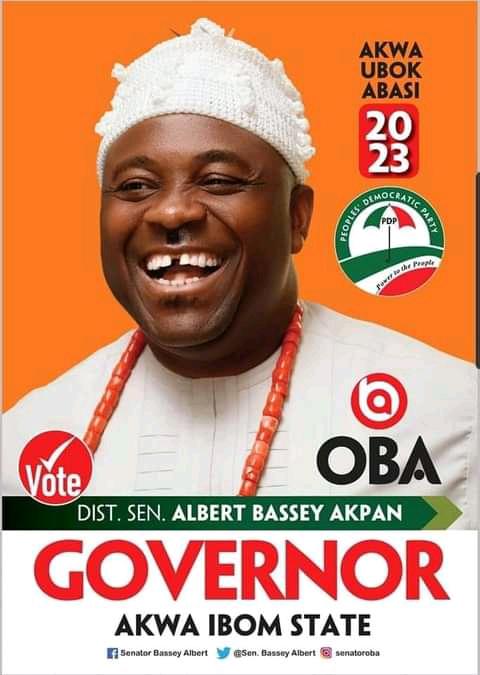