……..A massive crowd of Ikot Ekpene people, Saturday, thronged the Stadium to celebrate and welcome the Akwa Ibom State PDP Campaign team to the area. 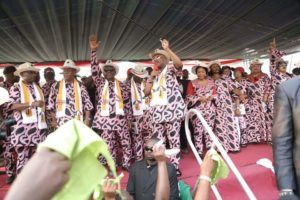 While giving accounts of stewardship in the past 3 and a half years, Governor Udom Emmanuel described the Peoples Democratic Party, PDP, as the only party that can guarantee their future.

He spoke of plans for the International Market to be constructed in the area explaining that land for that purpose has already been acquired. 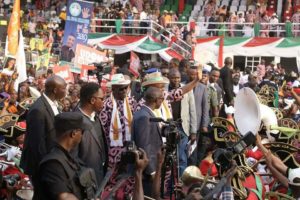 The Governor stated that four hundred million naira withdrawn for the relocation of electric poles and sixteen point eight billion naira for compensation on the Uyo-Ikot Ekpene road was not used for same purpose during that government.

He explained that his administration had to pay again for compensation and relocation of electric poles before the construction firm could continue with the job.

The Governor who described the Uyo-Ikot Ekpene road as one of the longest dual carriage ways in the region said the present administration has constructed twenty one kilometres in three years while four point three kilometeres was covered in eight years by the last administration. 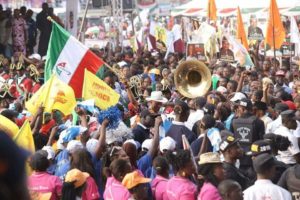 He however explained that everything was being put in place, including the construction of internal roads and the signing of the last management agreement for the hotel to become operational in Ikot Ekpene.

Governor Emmanuel said it was not part of Annang culture to betray In-laws or deprive them of what others benefited from and enjoined the people to remain steadfast with the PDP.

In a remark, the Director General of the Divine Mandate Campaign Organization, Otuekong Idongesit Nkanga told the people to look out for the Umbrella on the ballot paper and vote just that for all the candidates.

Also speaking, the state PDP Chairman, Obong Paul Ekpo eulogized the Governor for doing well especially in the area of industrialization and called on the people to vote for Alhaji Atiku Abubakar for President, Governor Emmanuel for second term, Dr Chris Ekpenyong as Senator and Nsikak Ekong, for House of Representatives as well as Mr Idongesit Ntekpere, House of Assembly.

The House of Representatives hopeful, Mr Nsikak Ekong, in a remark, described the Governor as a good In-law who will remain as the State’s Chief Executive till 2023.

High Points of the event were the presentation of party flags to candidates contesting the upcoming elections in the area and formal reception of defectors from APC including the former chairman of chairmen, Monday Ekanem.

Earlier, Governor Emmanuel and his entourage had stopped over at the palace of the paramount ruler of Ikot Ekpene, Okuku Okon Udo Ukut and obtained blessings from the royal father on his re-election bid.