IN THE NEWS: I SEE A FUTURE WHERE LEGISLATION IS FULLY DRIVEN BY TECHNOLOGY – Onofiok Luke

……….The Speaker of the Akwa Ibom State House of Assembly, Rt. Hon. Onofiok Luke has said that he is hopeful of a future when legislation will be fully driven by technology.

Luke said this in a brief media chat last weekend in Calabar, shortly after the maiden edition of TED-x Calabar, an independently organised event on Technology, Entertainment and Design which gathered some famous world thinkers and doers to share what they are most passionate about. 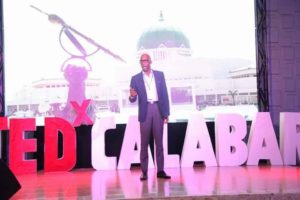 In his comment about the future of the legislature in Nigeria, Africa and globally, Luke gave his view on this as being dependent on how much technological capabilities can be utilized to contribute to the Parliament and it’s improvement.

“Within my area of coverage presently, we are looking at how setting up modalities that will aid citizens use technological capabilities to contribute to legislation. When we can live-stream public hearings and get direct inputs from the electorates on whatever bill is under consideration, or during debate in the floor of the chambers, where they can also input of the matter under deliberation.

Also, with the aid of technology, putting plenary sessions on live streaming will give the electorates the opportunity to rate the performances of their representatives and then determine who deserves another term by reason of performance. So I am looking at a future where technology will entirely drive legislative processes”, he added.

The Speaker who was one of the Speakers at the event had also shared his passion for the Parliament and legislation. In his presentation, Luke charged the audience on the possibility of standing out to make a difference by not always following the convention or status quo.

Speaking on the topic, Parliament 2.0: Future of Lawmaking, Luke narrated how he has been using his past and present days in the parliament to contribute towards the reality of a technologically driven legislation in the near future.

He also shared a story of how he went into leadership and politics with the determination to make remarkable improvements and create lasting legacies for the benefit of the present and future generations, Luke hinted that the success he has recorded so far in political leadership is as a result of the determination.

Stressing that he was able to succeed not only because he had the ideas, but also because he sought for the right platforms to convert them into realities that has contributed to development in diverse spheres, Speaker Luke further charged the audience to start seeking the relevant platform that will aid them bring their ideas to contribute to making their respective communities, nation and the world a better place.

“This is to charge the young people here that if they have an idea, they can change the world. If they have an idea they think can change legislation, they can begin somewhere by advocacy, they can start by seeking the right platform. Like we all saw, the hall was populated mostly by young persons who are aspiring to be one thing of the other. With the passage of the not too young to run bill awaiting the president’s assent, you don’t need to be a moneybag to get up there. If you think your idea can change a status quo either through legislative or executive office, you can as well seek the relevant platform and bring your ideas to contribute to making your community, the nation and the world a better place”, he said.

While commending the organizers for putting time and resources together to bring up the event, Luke also applauded the presentations by other speakers, who he said, contributed through their presentations to making the event a worthwhile experience.

“I must say that the sessions were all very rewarding. From the presentation of the carnival Calabar which showed us how we can make use of the resources we have to better our lives; the story of ‘money woman’ by Pastor Richard Akonam, which gave an expository of things that are happening in some places. People would think this is the kind of stories we used to hear in medieval times; but here it is, and pushing us to take action.

“To crown it all, there came the story of James Okinah that was very emotional. That really moved me into thinking of an action in that direction, because I have been hearing stories of street children in Uyo where I live. I have spoken to my mentees here that the next project we must undertake will be on how to take one or two of them off the streets.

“The presentation by Ibim was also a good one- getting us to get back to where we lost it in the Niger Delta. Generally, the different presentations contributed to making the event a worthwhile experience and I am leaving Ted-X today better, well loaded intellectually than I came. And I look forward to more of Ted-X in the future”, Luke added.