……….THE reigning Miss Akwa Ibom, USA, Miss Essie Ndem, has called on young women in the State, to cultivate the art of self-discipline, as requisite for self-development and success. 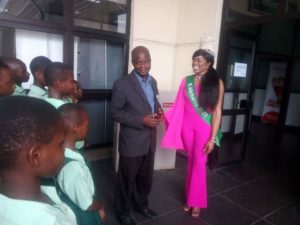 Miss Ndem gave the charge, while fielding
questions from newsmen, shortly after arriving the Ibom International Airport, Saturday, to continue with her career development programs for youths.

Speaking further, the Beauty Queen who was received at the Airport by Students of Mican Community Secondary School, Ibaka, Nsit Atai Local Government Area, advised young girls in Akwa Ibom to be focused, stressing they should also develop their academic and non-academic talents, which she pointed out, will shoot them to prominence. 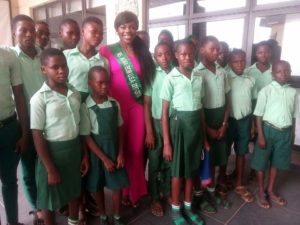 “Akwa Ibom Girls should stay focused, build their academic and non-academic talents to help them become young professionals. Believe in yourself and be self-disciplined”, she said.

About her pet project, the Young Professionals Development (YPD), Ndem revealed it is an initiative devoted to helping young people in Akwa Ibom State maximise their success through joint endeavours in academics and mastering vocational skills/non-academic talents.

She said YPD is aimed at ingrainning leadership and professional skills in the youths, to aid in their development, noting the project will be carried out across the State.

“Ukapiusa was a huge success, the Street Carnival was very nice, I think this is the beginning for Akwa Ibom State, so we expect that every December, people will come into the State, to spend time and money. It’s commendable, so we’re excited”, she added.

A Student of Mican Community Secondary School, Nsit Atai Local Government Area, Miss Mfon Udoh, said they were at the Airport, as a show of appreciation to the Beauty Queen for sponsoring an Essay Competition in their School, hinting through the event, they were motivated to study harder.

Another Student, a visibly elated Miss Comfort Peter, also lauded Miss Ndem for her cash award, describing it as a great contribution to their educational well-being.