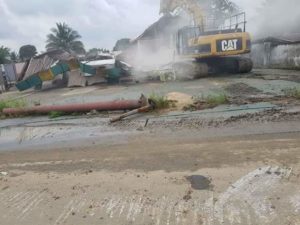 ………….Residents of Mbiabong Ikot Essien in Uyo Local Government Area will soon have reason to celebrate as Governor Udom Emmanuel has ordered immediate action to address the untold hardship, threat to lives and property suffered by the residents as a result of incessant flooding that has ravaged the entire community.

The Honourable Commissioner for works, Akwa Ibom State, Mr Ephraim Inyangeyen, who led a team of seasoned Engineers, to supervise demolition of structures to give way for drainage construction, said the Ministry had earlier ascertained the magnitude of the problem, with a view to come up with proactive measures that will help salvage the situation.

Addressing the people of the area, Commissioner for Works, expressed worry over the plight of the victims of the flood and conveyed the concern of Governor Udom Emmanuel, who he disclosed, has ordered that, urgent, speedy and immediate steps be taken to bring succor to the people, and to forestall impending damage to the dual carriage highway.

Commissioner Inyangeyen explained that, to correct the error, a drain to discharge the water 2 kilometres away from the main road will be constructed, adding that, for this to happen, several houses have to go down, including some structures in the Shelter Afrique Estate, particularly those properties that are close to the main road.

While assuring that adequate compensation for affected property will be paid to enable owners relocate, He urged the youths of the area to coperate with the government and the contractors handling the project to ensure speedy completion of the project.

Earlier, the Village Head, Etteidung Hosea Edem Okon, recounted the losses the flood water has caused the health, property and businesses of the people of the community, but however expressed gratitude to the governor for hearkening to their cry and intervening to salvage the sad situation.
Eteidung Okon pledged the cooperation of his people to expedite action and timely delivery of the project.

In a related development, Commissioner Inyangeyen in continuation of delivering on Governor Emmanuel’s infrastructure consolidation drive also inspected other ongoing projects including, Chief Udo Eno street, Akpasak Extension , Mbiaobong Etoi, Afahaube/Etaha Itam Market road, and Aka Community schools road network.
He announced that some of these projects will to be inaugurated by Governor Emmanuel on or before September 23 to mark the State’s Anniversary.