……………Governor Udom Emmanuel of Akwa Ibom State has called on the federal government to take bold steps towards addressing issues of neglect that gave rise to agitations in the Niger Delta region.
Speaking while declaring open the Inspector General of Police, South South Security Summit in Uyo, Mr Emmanuel lamented that several months after the Pan Niger Delta Forum (PANDEF) submitted a 16-point resolution to the Federal Government, nothing seems to have been done.
He also made a case for the relocation of multi national oil companies to their areas of operation explaining that, “all over the world, where the IOCs are operating, they operate from the base where they exploit the oil.”
He bemoaned that, “all the IOCs are in Lagos, and they are coming here to spill oil and nothing is being said and done. Why can’t Mobil operate from Akwa Ibom State? What do they want? We have The International Airport, we have good roads. Why can’t they operate from here?”
Governor Udom Emmanuel called on the Federal Government to re-examine the structures and performance of development agencies, saying “You can’t set up a development agency and hand it over to politicians. They will politicize the development. Let development agencies go to people that know how to manage resources, people who have done it overtime and know what to do with it so that they can also bring development into the region.”
He advised the NDDC to desist from politicization of development and liaise with the governors in the region to bring meaningful developments to the people, maintaining that the commission is unable to execute any meaningful project in his state because of the politicization of projects by the agency.
“When it is time for politics we will play politics, when it’s time for development, let’s develop and impact on the lives of our people and leave some of these things that we are doing. Let’s know that it is time we come together and get some things done for our people.”
He said it was sad that Akwa Ibom as the largest producer of oil, had no single oil depot, even as the region lacked federal presence with poor federal roads, erosion and other ecological challenges, and maintained that the meager revenue is barely enough to meet the needs of the people. 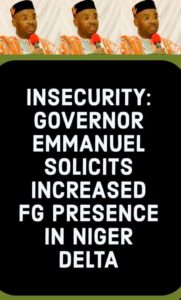 He posited that when youths are gainfully engaged, they will be too busy and focused on their job to have time for crime, “ a young man who leaves his house in the morning and works till 6pm, when he returns home, he will be struggling to take his shower and sleep for the next day. He won’t even remember anything like crime.” It is a joint effort. Let us all determine within us to tackle insecurity.
The Governor who recalled that the Niger Delta governors responded promptly when there was security challenges that affected the oil rich region, wondered why the revenue to the states have not improved despite the improvement in production and rise in oil prices.
Commending the topic of the Summit, “Insecurity: Socio Economic Impacts and Conflict Resolution Perspectives,” the host governor said the present crop of governors in the Niger Delta has given the Federal Government the highest level of support in terms of security than experienced elsewhere.
Speaking earlier, the Inspector General of Police, Ibrahim Kpotun Idris reiterated the commitment of the force to protect lives and property of citizens of the country, saying “We shall police with integrity.”
“Without peace and security, development and poverty eradication are not possible, and without development and poverty eradication, no sustainable peace can take place. For investors to invest in our economy, they must have confidence in the ability of the police force and other security agencies to prevent and stop crime,” the IG noted.
Also in his goodwill message, the Governor of Rivers State said the Inspector General of Police should encourage commissioners of Police to work closely with the governors of the states so that they can parley and plan the security agenda of the respective states.
“Please let us fight crime, let’s stop playing politics in fighting crime. There is need for us to work together… I have told everybody who cares, we are all politicians, join me to fight crime in my state, when the time for politics come my people will decide. But for now fight crime with me,” Wike said.
In his opening remarks, the chairman on the occasion and Minister for Niger Delta, Pastor Usani Usani commended the police force for the good work they have been doing for the country and sued for dialogue as the only way to tackle the issue of security and bring lasting peace.
Rear Admiral John Jonah, Deputy Governor of Bayelsa State who conveyed the goodwill message of his governor also commended the IG for the move and restated the commitment of Bayelsa State government to fight crime and criminality.