……………………..Akwa Ibom State Governor, Mr. Udom Emmanuel, has inaugurated Transition Committees for Local Government Councils in the State with a charge on the Chairmen to operate a participatory government in their respective Councils.

Governor Emmanuel gave the charge while administering oath of office to Chairmen of 30 out of the 31 Local Government Councils of the state, at Government House, Uyo. 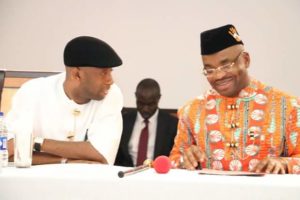 A Press statement earlier endorsed by the Secretary to the State Government Sir Etekamba Umoren, had announced the suspension of inauguration of Transition Committee for Itu Local Government Council.

Speaking shortly after the inauguration, Governor Emmanuel congratulated the newly sworn – in Council helmsmen and urged them to see their positions as opportunity to serve using basic principles of leadership.

“You should first of all look at the interest of the people you are serving because they are the ones you stand here today to represent. It is a simple principle in leadership”, The Governor stated .

He advised them to abide by the oath of office and shun tendencies of allowing personal interest to interfere with official matters stressing that they should view themselves as servants and a unifying force rather than using their offices to cause disaffection in the area councils. 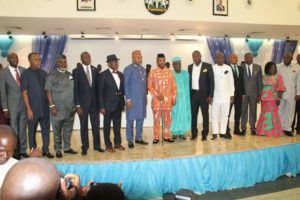 He said : “I’m not swearing you in to start campaigning. We are swearing you in as transition chairmen. Don’t use your office to cause disaffection because of your personal interest .This is a short transition so it is not going to be business as usual. Use your position to see how you can mend fences”

Governor Emmanuel expressed satisfaction at the performance of some of the council chairmen, especially in the opening of internal roads and maintaining environmental cleanliness even as he chided others who rested on excuses saying “It is at challenging times like this that real leaders emerge. Some of you have done so well while a lot of you still need room for improvement”.

The State Chief Executive sued for the bridging of gaps responsible for insecurity and conflicts in some local councils to enhance the implementation of the social contracts with the people and directed the Chairmen to swear in other members of the Committee in their respective Councils. 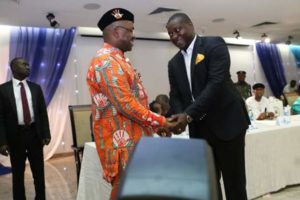 The Governor used the occasion to urge the transition chairmen to drive the campaign for enrollment in the ongoing voters registration exercise as well as the National Identity Card scheme in local Government Areas.

The Transition Committees are expected to hand over to a democratically elected government after the conduct of local government elections scheduled for November 11th this year.