…….Commissioner for Works, Akwa Ibom State, Mr Ephraim Inyangeyen has reiterated his commitment to support any initiative aimed at capacity building for youths, positing that, this policy is his mission in complimenting the tremendous investment in youths development by his boss, Governor Udom Gabriel Emmanuel. 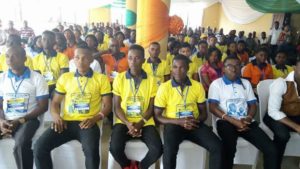 Speaking during the Graduation ceremony for beneficiaries of the Three months Computer / ICT Training programme powered by him (Inyangeyen), for Onna youths, under the auspices of the Intercontinental Friends Multi – Purpose Co-operative Society at the Council Hall, Abat, Onna Local Government Area, Commissioner Inyangeyen said, he was inspired by the efforts of Governor Udom Emmanuel to facilitate the training for the youths to acquire computer literacy. 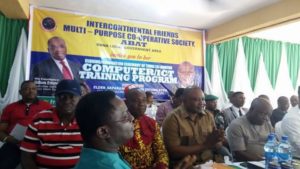 The works Commissioner while congratulating them, also charged the graduands to avoid deploying the knowledge acquired for cyber crimes or committing fraud, urging them to rather, engage in honest practice and services, maintaining that, this remains the best way to make genuine and sustainable progress in life business or any career.
Commissioner Inyangeyen used the opportunity to thank Governor Emmanuel for the opportunity given him to serve in his government, adding that, this privilege has afforded him the opportunity to add value to his community and the state at large.
He also pledged to partner with the Council Chairman, Hon. Imoh Attat, to facilitate a six months training for Onna youths in Oil and Gas technology and urged youths to brace up for the challenge.
Earlier in his address, the President of Intercontinental Friends Multi purpose Co-operative Society limited, Barrister Linus Ukpong, commended Mr Inyangeyen for his magnanimity in sponsoring the training, which he described as a demonstration of his love for the Youths of Onna Local Government Area.
Barrister Ukpong also congratulated the participants, especially the eventual graduands for becoming victorious against all odds at the end of the training. He disclosed that, the participants who were drawn from the twelve Wards of the Local Government, are equipped with basic computer awareness and operational skills in computer use and applications, and are therefore qualified to work in any office that requires computer experience.
Barrister Ukpong observed that the with the successful graduation, Commissioner Inyangeyen has registered a milestone as an icon of youths empowerment and development in Onna Local Government Area and Akwa Ibom State in general. He stressed that, the initiative was in line with Governor Emmanuel’s mission of personal /community development as enunciated in the Dakkada creed.
Goodwill messages were given by the Council Chairman, Hon. Imoh Attat and a former Secretary of the Peoples Democratic Party, Akwa Ibom State Chapter, Mr Anietie Ekong.
Hon. Attat commended the sponsor for the sacrifice he has made in putting in so much to fund the training of the Youths, pleading with him and other privileged sons and daughters of Onna to invest in the people and emulate the good example of Commissioner Inyangeyen.
A total of eighty one youths who successfully graduated were issued their Certificates. Ten best graduating students received brand new laptops, while the best graduating student got a cash prize of two hundred thousand naira, with the first and second runner up carting away cash prizes of one hundred thousand and fifty thousand naira respectively.

A cross section of the trainees including Ubokudom Ntiense Evans, Etoro Udofot Idiok and Idara Akpan Frank all of who spoke with newsmen expressed gratitude to God and special thanks to the sponsor for the opportunity.