He was unanimously elected earlier today by members of Ibesikpo Asutan Traditional Rulers Council (TRC) at the conference hall of the Ministry of Local Government and Chieftaincy Affairs, Uyo. 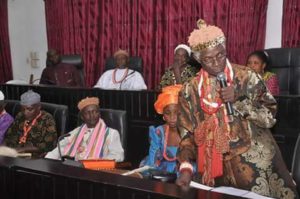 This was sequel to the letters issued out by the Ministry to Ibesikpo Asutan TRC to elect a new Paramount Ruler to fill the vacancy, which is in conformity with the Traditional Rulers Law of Akwa Ibom State 2000.

“It is my pleasure to accept the honor given to him today by the people of Ibesikpo Asutan as the Paramount Ruler elect”.

The monarch while thanking God for the opportunity given to him noted that there is no duty so dignifying and honourable than offering services to the people.

He extended his appreciations to Governor Emmanuel for appointing good hands to man various ministries of the State, with example being the Commissioner for Local Government and Chieftaincy Affairs, Hon. Udo Ekpenyong. He used the opportunity to applaud Commissioner Ekpenyong for his zeal since taking over the Ministry in always applying holistic approaches to ensure peace reigns in traditional institution of the state. 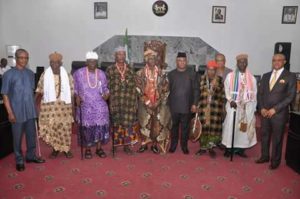 The Paramount Ruler elect commended the Ibesikpo TRC for finding him worthy to lead, even as he assured that his leadership will be all inclusive.

He reminded that the letters that were issued out by his office to all the members of the Ibesikpo Asutan TRC was for them to elect someone qualified for the position to fill the vacancy. He noted that it was in conformity with the Traditional Rulers Law of the State 2000, which spells out that “where there is vacancy in the office of the paramount ruler, the Commissioner for local government shall invite in writings all the clan heads and village heads appointed under section 1 subsection 2 of the law to select one of the Clan heads as a nominee for official recognition as the Paramount Ruler of the area”.

He said before the exercise held today, he has had an interface with them and has equally fulfilled all what was required of him by the law as Commissioner for Local Government and Chieftaincy Affairs. He however charged the new Paramount Ruler to discharge his duties diligently and maintain peace in the area.