……………Students in tertiary institutions in Akwa Ibom say they won’t be involved in any act of thuggery, crimunality or others acts of electoral Malpractices that would disenfranchise any group of persons.
The students made the call today in Uyo, when they rallied in their number to the Independent National Electoral Commission (INEC) office in Uyo, to register for their voters’ cards. 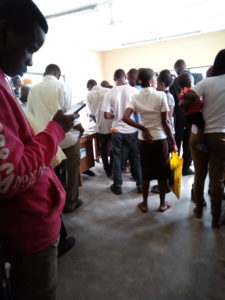 The student population which comprised mostly of students of the University of Uyo noted that the registration is to enable them exercise their franchise at the upcoming LG polls and subsequent elections.
The students’ Union Government President of UNIUYO, Comrade Duff Gabriel who spoke onbehalf of the students expressed gratitude to the SA on Technical Matters, Mr Ufot Ebong and the SA on students affairs’ Comrade Otobong Aquilla for supporting the UNIUYO community to partake in the continuous voters registration, by providing logistic support. 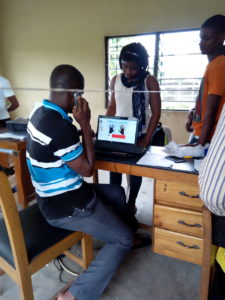 Duff noted that the students of the University of Uyo at known to be a sect with peaceful disposition, and as such wild refuse to be used as holigans during the election.
“My students are not the violent ones, they are good students. And at the same time they don’t involve in electoral malpractice. They maintain the decorum in terms of politics.”
“Though my advise here is that the students should always remain calm for their own safety.” 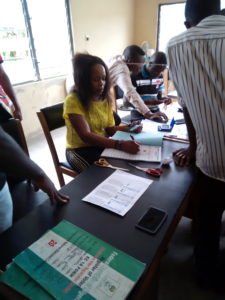 Speaking too, the National Association of Nigerian Students, (NANS), Zone B treasurer, Comrade Iberedem Esshiet reechoed that the students will no let themselves be used as thugs in the forthcoming elections. He also added that the voters registration was to allow the students express their political will by returning Gov. Udom Emmanuel in 2019.
He also advocated peaceful elections across the state, hinting of a fully developed plan to engage students in all tertairy institution campuses in the state on voters’ education.
“They are not coming here because they want to be politician, they are coming to register because they want to have their mandate to deliver and vote whoever they want to lead them.”
“We also advise students, any politician that comes to your father’s house or your room to hire you as a thugs during election. Tell that politician to go and take his son to come and be a thug during election. Not when they hire you as an illegal security, after the election they will go and take the legal security. So I don’t advise any student leader or any student, be it male or female to go and collect money for the purpose of thuggery.”
Speaking earlier, the Special Assisstant to Gov Udom on students affairs’, Comrade Otobong Aquilla added that the move was to reposition the student community to be politically relevant and vibrant, and to take active part in determining the leaders age influencers of public policy.