…………………..The Northern Youths Council of Nigeria, NYCN, have lauded the Akwa Ibom State Governor, Mr Udom Gabriel Emmanuel for his foresight in appointing Mr Ephraim Inyangeyen to serve in his cabinet as Commissioner for Works.

The NYCN gave the commendation when the body honoured Mr Inyangeyen with the Sir Ahmadu  Bello  Platinum Leadership Award of Excellence as ‘Garkuwan Matassan I’ which means ‘The Shield of Northern Youths’, when members of the Northern Youth Council of Nigeria paid him courtesy visit at his Office in Uyo the Akwa Ibom State capital. 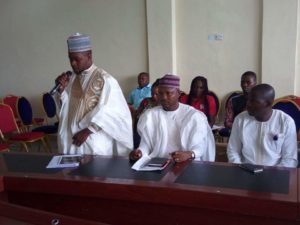 The leader of the delegation and the National Vice President of NYCN, Barrister Farouk Muhammed, in his speech said the award, was bestowed on Mr Inyangeyen in recognition of  his achievement as bridge builder, efficient public servant and patriotic contributions to nation building, which is observable in his career as a senior Nigeria Customs officer and a cabinet member in the government of Akwa Ibom State. 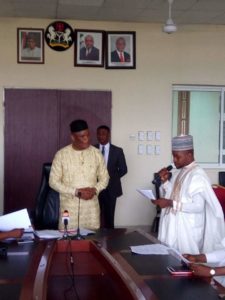 Barrister Farouk said that Governor Emmanuel in selecting Mr Inyangeyen clearly demonstrated his eye for talent and capacity and prudence, noting that, this has paid off in the hardwork, loyalty and total commitment to service delivery which are the hallmarks of the Commissioners conduct in office.

Barrister Farouk commended Mr Inyangeyen for his youth friendly disposition and embarking on several youth empowerment projects, like initiating free ICT training for youths and scholarships for many others, and announced that, with the conferal of the Award,  Commissioner Inyangeyen has been admitted into the NYCN Hall of Fame.

Acknowledging the honour done him by members of NYCN, Commissioner Inyangeyen pledged his commitment to work harder in partnership with NYCN and other youth organisations in the country to build a better Nigeria.

Commissioner Inyangeyen expressed delight that the NYCN is reaching out across the Niger and charged them to become the alternative voice for peace and unity and national integration in these trying times that tests Nigeria’s continued existence as one nation. 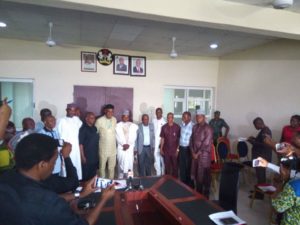 He thanked Governor Udom Emmanuel for the opportunity given him to serve, noting that, the objective is to add value to society and usher in the much needed development and prosperity for the people.