………………..There seems to be palpable fear within the leadership of the All Progressives Congress, APC, in Akwa Ibom, as chieftains of the party on Wednesday, defected in mass to the Peoples Democratic Party, PDP.

The TOWN CRIER reports that, strongmen of the broom party including the founder of Obong Nsima Ekere (ONE) Frontiers, Hon Samuel Effanga, a scribe of the APC in Uyo and over 300 others, defected to the PDP. 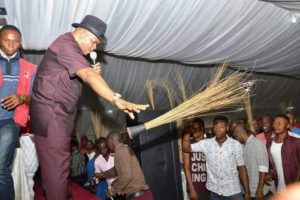 This, according to a member of Nsima Ekere faction of the APC, has unsettled the Managing Director of NDDC, Obong Ekere, who is warming up for the 2019 governorship race in the State.

Recall, that Hon Effanga was the progenitor of Nsima Ekere’s foremost campaign organization for the 2019 governorship election, called, ONE (Obong Nsima Ekere) Frontiers.

The Uyo born Economist and former Campaigner-in-Chief, Nsima Ekere for governor in 2019, in a remark, noted that, the APC is undemocratic and lacks every attribute of a political party and therefore should be seen as a threat to the common interest of Akwa Ibom State, adding that he and his fellow patriotic Akwa Ibomites are leaving the party before it sinks and returning to the PDP where they truly belong.

“I left the warmth of the PDP family with the hope that I was going to find more warmth in the APC only to be greeted by a high level of impunity. I want to say that I am back to the party that I truly belong to. A party that produced the present Governor who in the past two years has made impressive and result-oriented efforts in delivery on his campaign promises.”

He said the over 300 defectors who are leaders of thoughts in their various political bloc and circles have already begun the process of convincing their allies and supporters to return to the warm and beckoning embrace of the PDP in Akwa Ibom state.

Other chieftains of APC while speaking, said the reason for their defection, was due to the fact that, the broom party and their leadership in the State, had resorted to petty politics, blackmail and what they termed as hypocrisy.

They further disclosed, that as truly and objective Akwa Ibomites who are passionate about the State and its all round development, which the State Governor, Mr Udom Emmanuel is championing, they need not think twice before switching to PDP.

The State Vice Chairman of PDP, Elder Imo Okon, while receiving the decampees across all the political wards in Uyo, said PDP has an everlasting agreement and pact with the people of Akwa Ibom State, adding that the party has no opposition in the State.

While assuring the decampees that they have become full-fledged members of the PDP, with every right as other existing members, Elder Okon urged them to go and re-register as bonafide members of the party.

The PDP chapter Chairman, Uyo Local Government Area, Mr Idorenyin Orok, however, reiterated that APC had failed the nation within 2 years of leadership in the country, while charging all Nigerians, particularly supporters of the PDP to work assiduously to ensure PDP returns to power in 2019.

Other heavyweight politicians of Uyo extraction who spoke at the occasion, the Commissioner for Information and Strategy, Mr Charles Udoh, Chairman, Uyo Capital City Development Authority (UCCDA), Prince Enobong Uwah, Dr Val Attah, among others, expressed excitement for the influx of political bigwigs into their party.

They opined that the visionary leadership Mr Udom Emmanuel has demonstrated in the areas of education, agriculture, wealth and job creation as well as infrastructure development among other areas, has once again proved that PDP government was indeed and in truth, the only strong, trusted and reliable party.