………………The Senior Special Assistant to the Governor on Technical Matters and Due Process, Elder Ufot Ebong has advised youths of Akwa Ibom State not to depend on government for white collar jobs. 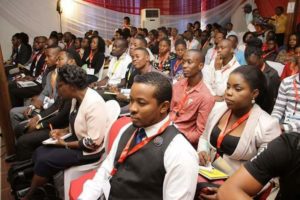 Elder Ebong who doubles as the Coordinator of Akwa Ibom Enterprise and Employment Scheme (AKEES) said youths should discover ways of making themselves employable than waiting for white collar jobs.

The Governor’s aide further sensitized the youths on the birth of AKEES and various opportunities available in the scheme.

“there is a difference between issuing jobs and creating jobs which means creating a favourable climate for people to help themselves, polishing up people’s ideas to enable them stand on their feet or pointing at a direction where people can make money for themselves and not from you. So he started thinking and looking at various models of unemployment reduction. And that is how AKEES was born”

“In those days we had serious entrepreneurs like Victor Akan who owned the tallest building in the then Cross River State. He used to produce rubber slippers and long span roofing sheets, though he was a surveyor. We had Ambe Bassey, Utuks who was a very wealthy palm produce merchant. We had Usoro Bros, Money Hard, Ekanim Pyramid in Eket, Etesis and so on”.

“Who can you mention now in that calibre? All these were entrepreneurs who made so much money in their time. Some had so much money that they founded football clubs like Etesis Jetimo and Samphill and you know what it means to own a football club in those days. But we don’t have such people again; everyone wants to go into politics”