…………..Desirous of developing Stars from budding athletes and footballers among the youths of Akwa Ibom origin in the face of increasing rise of Sports as a major revenue earner, Governor Udom Emmanuel has continued to sink huge resources into organising programmes and activities to hunt promising neophytes and talents in the sector. 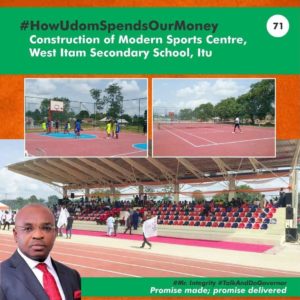 One of such talent hunt government activities was the First Akwa Ibom Youth Sports Festival in which all the 31 LGAs in the State featured yourhs from their areas to participate in the festival..

Many budding athletes and footballers were identified and selected for mentoring and coaching into becoming the Ronaldo; Messi and Usain Bolt of Akwa Ibom State in the spirit of “catch them young”.

Like the idea? Yes…
That’s how Udom Spends Our money.
More to come.