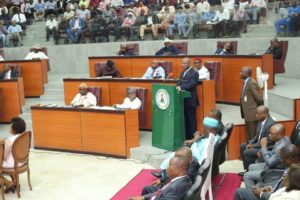 It is with great humility that I welcome the Governor of Akwa Ibom state, His Excellency, Deacon Udom Gabriel Emmanuel, to this hallowed chambers for the purpose of the 2019 budget presentation. I welcome other members of the state executive council, former legislators, Heads of Ministries, Departments and Agencies, elder statesmen and Akwa Ibom people who have come to be a part of this all-important state assignment.

Indeed, it gives me great personal pleasure and deep sense of patriotic involvement in the development of our God-given state, that I sit here today to preside over the presentation of this year’s budget, the fourth and the last that I shall receive as the 11th Speaker of the Akwa Ibom state legislature. It would therefore be a show of great ingratitude if I should fail to acknowledge the unquantifiable benevolence and constant grace of God in all that has happened in this Assembly and in our state since we received the first budget of this administration in December, 2015. I am most grateful and obligated to say, may all praise and honour go to the Almighty who has provided the strength, the direction, the wisdom, good health and comradeship amongst fellow parliamentarians in our collective service to fatherland.
The occasion of any budget presentation usually offers opportunity to review the state’s scorecard in budget interpretation, execution, financial prudence and the envisaged impact on the masses. The issue ideally has not been how big or small was budgeted for a particular year, but the level of utility and transparency with which managers and custodians have executed budget.
For a typical budget to fully derive or meet the goals and expectations of a fiscal year, it must be driven by integrity, accountability, fiscal responsibility, vision and pragmatism. That is so because it is one thing to have a budget but an entirely different thing to have it implemented to the latter within the context of available resources and set aims. I must state here categorically clear that the administration of our performing Governor has met the above stated criteria in budgeting. This conclusion is founded on empirical facts.

The aim of the 2016 budget of sustainable development, for instance, was to provide sustainable development in Health, Education, Security, Industrialization and to strengthen other areas of our social welfare system. It must be noted that having been inspired by the State Medium Term Plan Document, the AK – VISION 2020 which was a major underlying principle of the 2016 budget, this assembly immediately came up with legislations that supported the implementation of that year’s proposals. Recall that is was in that year that I gave Akwa Ibom people the commitment of the state assembly under my watch to evolve a process for the cooperation of powers between the legislature and the executive.

Our cooperation of powers with other arms of government was, of course, without prejudice to our oversight role, but for the simple reason that we wanted to synergise our lawmaking mandate with the vision of the administration for the ultimate purpose of delivering the dividends of democracy to every Akwa Ibom person. To the glory of God Almighty, the many industries employing our people across the state today represent the successful outcome of that cooperation of powers that we started. Most importantly, the 2016 fiscal policies ensured the security of lives and property of the Akwa Ibom people and this has attracted so many investors and impressive investments.

It was unmistakable the fact that although the nation remained in recession, the 2017 budget of Consolidation brought by the state executive to this house was a well-planned roadmap for greater prosperity. That budget enjoyed the overwhelming support of this house following its promising indicators for enhanced welfare for our people. Prompted by the developmental catalysts captured in the 2017 budget in line with the state’s medium term development plan, this assembly, after due consultation with the people through our traditional public hearing, expedited the passage of that budget and monitored its implementation. Improved security, infrastructure development, and the inflow of investors to the state in 2017 justified that budget of consolidation.

Job creation, security, and friendly investment environment, as the hallmarks of this administration was reemphasised in the 2018 budget of consolidation on industrialisation.

Besides reinvigorating agriculture and strengthening the existing fiscal regime, this assembly has noted the well-planned strategy of the state executive towards implementing the agenda for further industrial growth. We remain on a well-paved path that will lead more investors into our state in 2019 and in the coming years.

Let me iterate that the legislature, being the clearing house of government, is in most competent capacity to adjudicate the performances of other arms of government, particularly the executive. Having monitored the budget programme of Akwa Ibom State for over three years now and considered the pros and cons in my privileged capacity as Speaker, I make bold to say without any fear of contradiction that since 2015, our commonwealth has been safe, and has been seen and felt in the massive growth and development of critical sectors of our economy. Our state has become safer heaven for citizens, visitors, tourists, and investors.

Having had the privilege to receive, and analyse the budgets of the current administration for three consecutive years, and against my experience in 3 previous years as Chairman of appropriation and finance of this honourable House, I am in an informed position to weigh the indices and draw conclusions on the performance of the budgetary proposals of this government. Without sentiments, I wish to state that the fiscal responsibility which has been brought to bear on our state finances has been such which has promoted nothing short of our common prosperity and the security of lives and properties of Akwa Ibom people.
That our people are safer and more secure today is the direct effect of the towering priority given to prosperity and security in the previous budgets of sustainable development, consolidation and industrialisation. I say this from the position of incontestable knowledge.

Ladies and gentlemen, distinguished colleagues, let me use this occasion to state, and without sentiments, that Governor Udom Emmanuel, has exceeded our expectations in 2018. This acknowledged performance has inspired the confidenceof this house in his lofty policies and vision for the state running through the remaining four years of his second term. In commending him, my mind readily goes to the “Great Man Leadership Theory” that was proposed by Thomas Carlyle in the early sixties, with the popular proposition that “Great leaders will arrive when there is a great need”. Governor Udom Emmanuel arrived at a time of great need. He came at a time when the country was reeling in economic recession, when most governors could not pay salaries; when the economic situation defied almost all possible solutions.

This administration leveraged the therapy of professionalism and sound financial management to keep the state above troubled waters. With the support of the 6th assembly, this administration did not only ensure prompt payment of workers’ salaries, gratuities and pensions as at when due, but embarked on, and sustained, its massive infrastructure development and industrialisation agenda.
The government ensured steady growth of the agriculture sector, it added quality to its free education policy, developed human capacity through skills impartation as well as created employment through industrialization, and boosted small and medium scale enterprises through soft loans. All of these were faithful steps that were taken at a time of nationwide economic downturn.

The Akwa Ibom state House of Assembly is pleased to receive in time the 2019 Budget of Industrialisation for Poverty Alleviation. The timely submission of the budget is an indication of the current administration’s readiness to launch a virile transition to yet another 4 years of prosperity and security for our people. We have no doubt that it will be another 4 years of strengthening the institutions which drive democracy in our state rather than that which strengthen individuals to tear down our institutions. May I use this opportunity therefore to express my personal delight and the satisfaction of members of this honourable house that this budget was prepared with legislative autonomy in mind. It is my fervent appeal therefore that the autonomy be followed up by His Excellency with due implementation in line with the constitutional provisions as captured in Section 121(3) of the Constitution of the Federal Republic of Nigeria 1999 (Alteration No.4) Act 2018. I am more than optimistic that the implementation of this autonomy will revitalise the fabrics of good governance in Akwa Ibom state, and strengthen the independence of the state legislature.

Rather than put the legislature at loggerheads with the executive as some have reasoned, the implementation of fiscal autonomy for the state legislature will oil the wheels of governance through the existing principle of cooperation of powers which I have championed in the last three years.

Finally, as we ready ourselves to take even bolder steps in 2019, it is only logical that Akwa Ibom people stand with no one but only God to drive our collective dreams to the profitable heights which His Excellency, Deacon Udom Gabriel Emmanuel has envisioned. It is important that we remind ourselves of the benefits in security and in the growing prosperity that we have had, benefits arising from sound policies which have galvanised our economy. We must remember that at a time when all that is paramount to many is to grapple political power, we have in Udom Emmanuel an option which will best further our collective interest. We have in him a man whose interest is to further the Akwa Ibom project, which is to establish an educated, healthy, united and prosperous state under one leadership and under one God.