………….The governor of Akwa Ibom State, Mr. Udom Emmanuel has said that his administration will build an untra-modern Cottage Hospital in Nsit Ibom local government area. 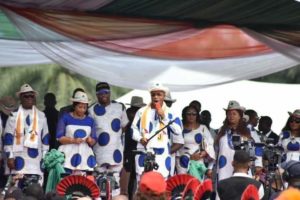 He said the medical facility, on completion, will be one of the best in the country, adding that contractors will commence work on the project immediately after the elections.

Mr. Emmanuel disclosed this on Saturday at Afaha Offiong, Nsit Ibom local government area, when his campaign train landed in the area.

The governor who was welcomed to the rally by large number of enthusiastic supporters, pledged his commitment to the people of Nsit Ibom, assuring them that they should expect more democratic dividends in his second term. 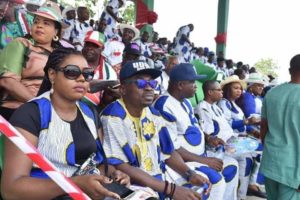 He called on the people to ensure victory for the party at the centre, noting that it’s only the PDP that has the blueprint to empower the youths and revamp the education sector.

The Chairman of Nsit Ibom local government area, Hon. Eric Akpan, assured of 100 percent votes from the area, adding that the voting population in Nsit Ibom which was forty-five thousand in 2015 has since risen to sixty-two thousand. He said those talking of federal might will be resisted with local might, noting that the God that gave Attah and Akpabio victory in their second term, is still alive and will grant victory to Mr. Udom Emmanuel.

The chapter PDP chairman of the area, assured the governor of victory, stressing that nobody can stop his re-election.

Speaking on behalf of the youths, Idorenyin Noah, pledged the support of youths for the governor, adding that the youths are solidly behind his re-election He said the youths will never be intimidated by anybody, pointing out that those talking of federal might will meet community might.

On behalf of the women, Obonganwan Aniedi Inyang, said the women will stand with the governor for the remaining four years of his administration having stood by him in his first four years.

She decried the kidnappings that was a regular feature in the recent past, noting that since Governor Emmanuel came on board, the story has changed. She said they cannot afford another government that will return the state to the ugly past.

A former Speaker of the Akwa Ibom State House of Assembly, Hon. Anietie Etuk, said they’ll replicate what they did for the governor in 2015.

Describing himself as a man of action, he said the people are ready to vote and defend their votes, adding that there has always been opposition to the re-election of every governor in the state, “but we’ll win as usual,” he stated.

Barr. Onofiok Luke reaffirmed his commitment to giving the people a quality representation at the House of Reps, pledging that he’ll collaborate with Senator Bassey Albert and Governor Udom Emmanuel to work and defend the interest of the state.

On his part, Senator Bassey Albert said the elections will be used as an avenue to tell people that “God is God and man is man. And at the end of the elections, they’ll all bury their faces in shame.”

Senator Albert, popularly known as OBA, said for the sake of equity and fairness, Udom Emmanuel will complete his eight years in office.

A former Commissioner of education in the state, Nelson Akpan, who said he left the APC because the party has no future, drummed support for Udom’s re-election.

Hon. Mfon Ekong, House Member, Nsit Ibom State Constituency, also lent her voice to the need for Governor Emmanuel to return as governor, urging the women to turn out en masse on election day and vote for the governor. 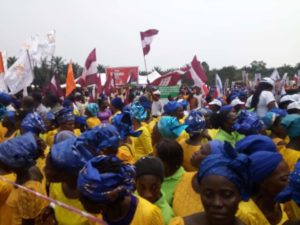 House of Assembly candidate for Nsit Ibom State Constituency, Ifiok Udoh, promised Gov. Emmanuel victory on March 2nd, adding that they will deliver all PDP candidates in the forthcoming elections.

The chairman of the party in the state, Obong Ekpo who handed flags to PDP candidates for the upcoming elections, also received APC defectors into the PDP.

Speaking on behalf of the defectors, Godswill Nelson, said they decided to leave the APC over what he described as the lies and deceitfulness in the party. He said they are with Udom and will vote for him massively. 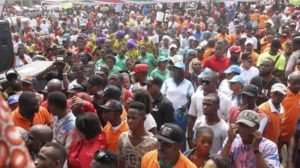 A onetime House of Assembly aspirant, Nsikak Udobia, also defected to PDP. He collapsed his structure in support of the PDP candidate for Nsit Ibom State Constituency, Mr. Ifiok Udoh. He pledged to work for the success of Governor Udom Emmanuel.