YOU’LL NOT REGRET VOTING Me – UDOM ASSURES A’ IBOM PEOPLE

Akwa Ibom State governor, Mr. Udom Emmanuel, has pledged to serve in a selfless manner, adding that the people will have no regret voting for him. 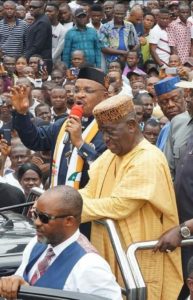 He said he’ll be governor for all irrespective of voting patterns, even as he attributed his success and that of the PDP in the state to God. “We will not discriminate against anybody. When you honour God, He’ll take you to greater heights,” he stated. 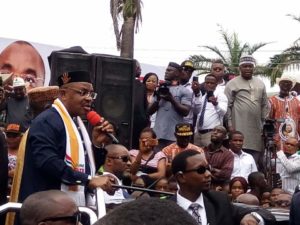 The governor made the remarks on Thursday at the popular Ibom Plaza round about shortly after receiving his Certificate of return from INEC. 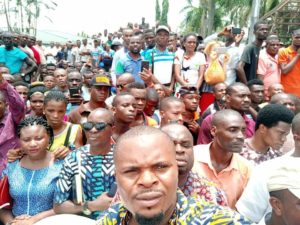 The governor who intermittently waved in acknowledgement of cheers from the jubilant crowd as the motor he drove in snaked through the thick crowd, urged the people to live in unity and shun all divisive tendencies.

The governor who noted that his administration will strive to unite the state, called on the people to live in peace and harmony, stressing that he will not discriminate against anybody. “Go and love one another; live in peace. We will not discriminate against anybody. Whether you voted for us or not, we’ll treat everybody equally.

The governor used the opportunity to thank the people for voting for him and the Peoples Democratic Party (PDP) in the last general elections, pointing out that no amount of money will be enough than thanking the people for the love shown him and other PDP candidates at the polls. “We are here to thank Akwa Ibom people. What we’re doing now is that we’re showing appreciation for your support. No amount of money will be enough than to say thank you. We are using all of you to reach out to all those that voted for us at all the villages and voting points in the state.”

He noted that the last elections has reaffirmed the dominance of PDP in Akwa Ibom State, stressing that if elections are conducted 100 times in the state, PDP will still win so long as it’s conducted in a free and fair atmosphere.

The governor who stressed that the state has been liberated, added that the last election has shown that no one man can determine the future of over five million people.