………..Ahead of 2019 governorship elections the elders and stakeholders in Uyo and Eket senatorial districts have reaffirmed their position and resolve to support and standby Governor Udom Emmanuel to complete two terms of eight years as governor of Akwa Ibom State.

This was the general position during a special thank you visit by the Eket Senatorial District Elders to their counterparts in Uyo at Ikot Nya, Nsit Ibom Local Government Area the country home of a former governor of the State, Otuekong Idongesit Nkanga. 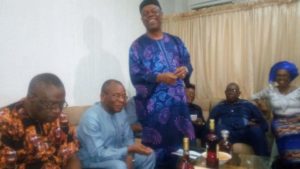 Speaking at the occasion, the leader of the delegation and former Minister of Lands, Housing and Urban Development, Chief Nduese Essien said his people deemed it important to physical demonstrate appreciation to the Uyo elders for mobilizing their people strongly in support of the Governor’s election in 2015. 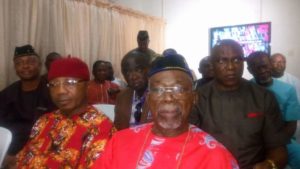 Chief Essien said they have also stood by the governor since the inception of the administration till date and appealed for more support to enable the Governor to successfully retain his mandate in 2019.

“From experience, it is practically impossible to fulfill all the intentions that one had in a single term of four years, be it in a legislature or in the executive; that is why during my tenure in the House of Representatives, I was able to bring back majority of the projects to my constituency in my second term.” 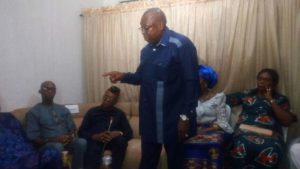 Chief Essien pointed out that the first four years of the administration, Mr Emmanuel has proven that he has what it takes to lead the state and assured that in the second term, he will be able to consolidate on the foundations he has laid.

He said at such a challenging period in the history of the country, it was important for the three senatorial districts to come together and form a common bond to advocate on issues of common interest for the people of the state. 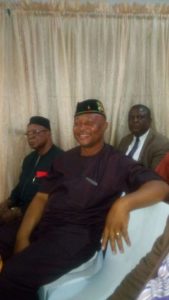 He lauded the people of Uyo Senatorial District for the choice of Speaker for the State House of Assembly, maintaining that Barr. Onofiok Luke’s ingenuity has made him successfully lead his colleagues to lend their unflinching support to Governor Emmanuel’s administration.

“In fact, we in Eket had wanted him to be the Speaker from the inception of the administration, and we were very pleased when he eventually assumed that position at the time he did. Everyone can see that he is performing well,” Chief Essien asserted. 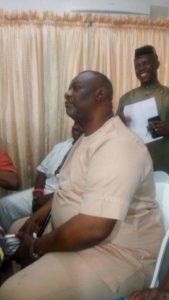 This view was collaborated by the deputy leader of Uyo Senatorial District Elder’s Forum, Dr. Val Attah who described Barr Luke as a man who was destined as the anchor point for the future of the state.

He said as elders they were satisfied that Barr Luke has justified his current position.
“Speaker, we are grooming you up for a greater tomorrow.

We see you taking over from us.

There is a generational change and you have not failed us,” Dr Attah said.

Former Governor of the State, Otuekong Idongesit said his people were determined ensure the re-election of Governor Udom Emmanuel and was determined to ensure that nothing impedes that decision. 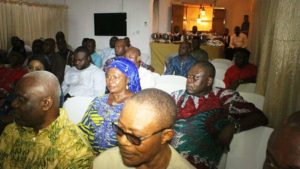 He said Mr Emmanuel was also their son and will always enjoy their support because his leadership has been very commendable.
“Governor Emmanuel’s re-election is so important to us that if anyone consults us for any other position come 2019, we only listen to such a person if he ties his aspiration to the second term aspiration of the Governor.” 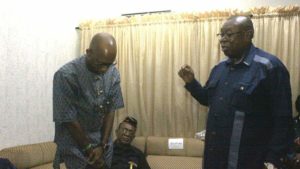 Nkanga, the Board of Trustees Committee Chairman of the Uyo Elders Forum admitted the need for more collaborative positions among the different geo-political zones and ethnic groups on national issues, to avoid being submerged by national policies that are against the interest of the State. 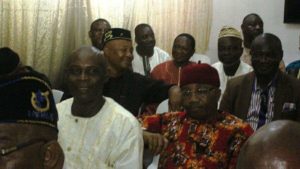 He said the Niger Delta zone cannot dance into the tune of certain elements who are bent on provoking the region into avoidable crises and re-iterated the stance of their stand against the obnoxious onshore/offshore oil dichotomy which was smuggled into the restructuring proposal by the APC-led federal government. 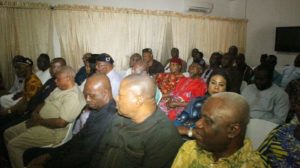 Senator Anietie Okon and Chief Ekpe Atakpo also commended the Eket Leaders for the visit, saying it was necessary to strengthen the bond of unity among the entire groups in the state.

Senator Okon vowed to be relentless in speaking out against the calculated attempts to perpetuate injustice against the people of the state.