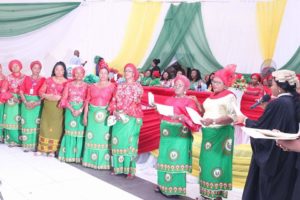 Administering the oath of office and allegiance, the legal counsel, Barr (Mrs.) Sylvia Joshua, charged the newly elected Executive members to uphold the tenets of their offices according to the constitution of the forum.

The inauguration which held at the Independence Hall, Abak Local Government Area, had in attendance the wife of Governor, Mrs. Martha Udom Emmanuel, the Hon. Commissioner for Women Affairs and Social Welfare, Dr. Glory Edet, Special Adviser to the governor on Bureau of Cooperative and Rural Development, Mrs. Ekemini Umoh, Chairmen of Boards from the Senatorial District, members of Board of Trustees of the forum and a cross section of members of the forum. 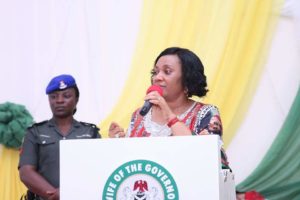 In her acceptance speech, Lady Iniebehe Silas thanked the group for the confidence reposed in her, and promised to lead the organisation on the right path.

Lady Silas said as a founding member of the group, her election into the office of the President has positioned her to protect the ideals to which the group was formed.

While promising to always support the administration of Governor Udom Emmanuel whom she noted remains a worthy son-in-law of the area, Lady Silas called on all members of the group to eschew any divisive tendency that may throw the group into mud. 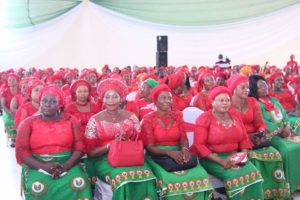 Admonishing the group, the wife of the Governor, Mrs. Martha Udom Emmanuel charged the new Executive members to take the group back to its members at the grassroots.

Mrs. Emmanuel further advised the Executives of the group to come up with programmes that will benefit the members, stating that the forum was set up to impact women of the senatorial district.

The governor’s wife called on the women to advise their wards against political thuggery especially as the forthcoming general elections draw nearer.

Earlier speaking, the Hon. Commissioner for Women Affairs and Social Welfare, Dr. Glory Edet who thanked the governor’s wife for her motherly disposition towards the group, charged the new executives to fashion out plans that will better the lots of the women of the area.