…………….Two first-half goals from strikers Musa Newman and Gabriel Okechukwu inspired Akwa United to a 2-1 win over Lobi Stars of Makurdi at the Uyo Township Stadium on Friday afternoon.

Newman gave the Promise Keepers the lead in the 20th minute when he rose above Lobi Stars defence to nod home Ifeanyi Ifeanyi’s perfect delivery from a corner kick.

The Makurdi-based team reduced the deficit in the 43rd minute through striker Kingsley Eduwo, who tapped in Anthony Okpotu’s cross. 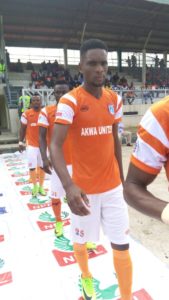 The matchday 36 encounter – which was originally fixed for Sunday at the Nest of Champions – was brought forward and moved to the Uyo Township Stadium by the League Management Company to avoid disruptions to the ongoing maintenance of the Nest of Champions, where Nigeria will face Cameroon in a 2018 World Cup qualifier next week.

Coach Abdu Maikaba made three changes to the team that lost in Nnewi – Vice Captain Ariwachukwu Emmanuel and Ifeanyi Ifeanyi returned to the starting line-up after helping the CHAN Eagles to qualify for the 2018 CHAN tournament, striker Gabriel Okechukwu was preferred to partner Musa Newman in attack, while Aremu Afeez and Christian Pyagbara started from the bench. 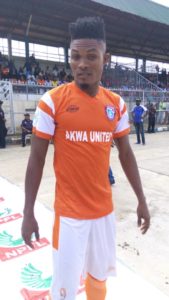 The explosive encounter witnessed both teams missing lots of goal scoring chances throughout the game.

The Promise Keepers started the brighter of the two sides and dominated large spells of the game, but failed to convert many chances.

Cyril Olisema, Ubong Friday and Gabriel Okechukwu all missed clear opportunities to score for the Uyo side, while Anthony Okpotu, Kingsley Eduwo and Uchenna Eze were also guilty of not making the best of their team’s chances.

In the end, it was Akwa United that deservedly picked all three points and cruise to their 15th home win of the season.

The victory – the Promise Keepers’ 16th of the 2016/2017 NPFL season – reduced the gap between 2015 Federation Cup champions and second-placed MFM to just two points.