IN THE NEWS‬: Why A’Ibom is witnessing steady rise in development –Speaker Onofiok Luke

………Speaker of the Akwa Ibom state House of Assembly, Rt. Hon. Onofiok Luke has attributed the steady rise in development in the state to the seamless collaboration of powers among the three arms of government in the state. 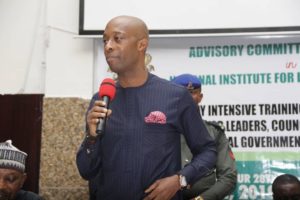 Speaking on Wednesday at the opening of a 2-day workshop for councillors, clerks and sergeant at arms of local government legislatures in the state, Barr Onofiok Luke acknowledged the existing mutual respect between the legislature and the executive.

The workshop which is facilitated by the National Institute for Legislative and Democratic Studies (NILDS) in collaboration with the Akwa Ibom state Government through the State House of Assembly, seeks to develop legislative outputs at local councils across the 31 local government areas of the state. 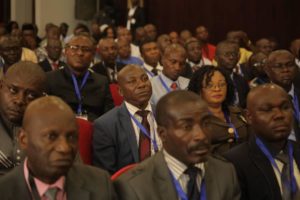 According to the Speaker, the training has been organized for the councillors in line with the assembly’s commitment to its capacity development agenda.

He emphasized the need for local councils to engage in constant training and to prioritize the needs of their local constituents above political or personal interests.

Deputy Governor Moses Ekpo admonished the councillors and Legislative staff to take the workshop seriously in order to sharpen their lawmaking skills.

Present at the opening ceremony which was attended by all the councillors and management staff of legislatures across the 31 local government areas of the state were the state Governor, Mr Udom Emmanuel who was represented by the deputy governor, Mr Moses Ekpo, Secretary to the state Government, Dr Emmanuel Ekuwem, the leadership and members of the Akwa Ibom state House of Assembly among others top officials.