IN THE NEWS: AKHA mourns exit of former Deputy Chief Whip in the 3rd Assembly

*She was firm, resolute in her legislative duties –Speaker Luke

…………As the remains of Late Hon. (Barr) Iniobong Enobong Eshiet, a former Deputy Chief Whip in the State House of Assembly who represented Etinan state constituency between 2003 and 2007 will be laid to rest today in her home town in Etinan, the Speaker of the House of Assembly, Rt. Hon. Barr. Onofiok Luke has described the deceased as a great woman who was courageous, firm and resolute while representing her people in the third Assembly. 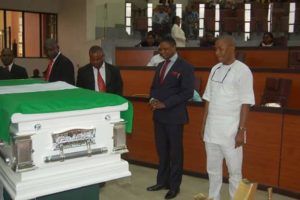 Delivering his tribute on Thursday during a joint valedictory sitting which had in attendance former and serving members of the House of Assembly, Barr. Luke urged serving and those aspiring to become one in the future to emulate the sterling qualities which the Late Iniobong Eshiet exhibited during her time. 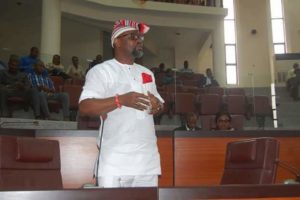 In his words “What I’ve seen as the underlying factor that was found in her… One thing i have seen, watched and heard from the tributes is that of being an independent minded person. She was a courageous leader who was firm and resolute. Those are the qualities of a good legislator.
And I’ve heard as one of us was speaking that she does not say yes until she is convinced.. And she was not the type who would say no if she was not convinced. You can’t talk her into saying ‘No’ until she is convinced, and we must learn as legislators to be independent minded. Speaking on what you believe in, not being cajoled to speak. And i think that is the lesson for legislators and those who are coming in to sit in this hallowed chambers. 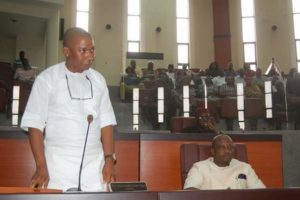 In his condolence message to the deceased family, the Speaker prayed God to grant members of the family the fortitude the bear the loss. He also commisreated with a former Speaker of the House and the Federal House of Representatives member for Etinan Federal Constituency, Rt. Hon. Sam Ikon who was present during the sitting, Etinan people and the Federal Constituency over the loss. 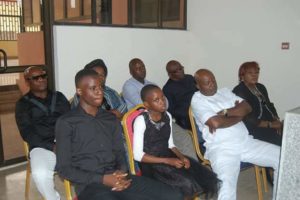 Serving members of the House of Assembly and former legislators under the aegis of Congress of former state legislators took turns to pour eulogies on the Late Iniobong Eshiet. In his tribute, the lawmaker representing Etinan State Constituency Hon. (Barr.) Aniefiok Dennis who once served under the deceased former parliamentarian as her legislative Assistant, extolled the virtues of the Late Hon. Iniobong Eshiett whom she described as a sister.
In his words “I am a product of the 3rd Assembly (2003-2007) because my first stint in this Honorable house was through Hon. (Barr.) Iniobong Eshiett who gave me the opportunity to serve as her Legislative aide. She was my senior sister and senior professional colleague”.

On his part, the member representing Etinan Federal Constituency at the National Assembly, Rt. Hon. Sam Ikon who took over from the deceased in 2007 as House of Assembly member for Etinan, who said he had benefitted immensely from her numerous pieces of advice described Late Hon. Iniobong Eshiet as a legislator who was particularly interested in the development of her constituency.
According to Ikon: “She was my confidant and I feel so heartbroken for this is the first time I happen to attend a valedictory session of someone who happened to be very close to me. Looking at this casket, it behoves on me that, someday it would be me or any other Lawmakers among us. It is only God that will console us”

Deputy Speaker of the House, Hon. Mrs. Felicia Bassey who battled hard to control her emotion over the demise, recalled the encouragement she got from the departed which she said contributed to her emergence as a lawmaker in the current Assembly.
“Barr. Iniobong Eshiet was an amazon, a great politician and friend. Where I am today in this legislature, Barr. Iniobong Eshiet encouraged me. She was very industrious and hard working. Akwa Ibom State House of Assembly, her family, and the women of Akwa Ibom State will miss her”.

Chief Whip of the House, Hon. Emmanuel Ekpenyong, who described her exit as a great loss, reminded the living on the need to always carry out soul searching by reflecting on their deeds while alive on earth in order to make amends where necessary.

“One day we shall surely die, but when you die what shall you be remembered for?”.

On his part, the member representing Essien Udim State Constituency, Hon. Nse Ntuen described the deceased as a great woman who was ready to sacrifice for the good of humanity.

The member representing Ibesikpo Asutan state constituency, Hon. Aniekan Uko described her as an active member of the forum of former legislators. He eulogised her for the qualities she exuded while serving in the third session of the Akwa Ibom State House of Assembly.
“As a representative of the then Governor Obong (Arc.) Victor Attah, there is never a time our Son had cause to complain about our departed sister. Their working relationship was absolutely cordial”

A former representative of Essien Udim in the third Assembly, Hon. Dr. Etido Ibekwe who served as House Leader, had this to say of his departed colleague ” She was an active legislator, a great woman mobilizer, she was a very potent voice in the 3rd Assembly who championed the cause of gender equality” 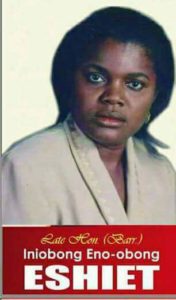 Former Oruk Anam representative, Hon. Mabel Udongwo said “I met with Late Iniobong Eshiett since June 2003 when we were inaugurated into the 3rd Akwa Ibom State House of Assembly and ever since then till her demise, she was calling me MY SISTER. She represented Etinan very dexterously, she was a very caring sister who was always there for her family and friends”.

A former Chief Whip in the 3rd Assembly, Rt. Hon. Chief Ukata Akpan, also paid his last respect to his colleague. “Late Hon. (Barr.) Iniobong Eshiett is gone, she lived a virtuous life but let all politicians of today review their lives and serve knowing that one day we will all be gone to give accounts of our stewardship and deeds to the Almighty Creator”.

The valedictory session also featured a brief prayer for the deceased family.