IN THE NEWS: Akon Eyakayin, Nduese Essien, Goodness Lambert, Others Counsels Students to Shun Cultism and other Social Vices.

………..Students of Government Secondary School Afaha Eket and their counterparts from around the state have been charged to remain worthy Ambassadors of the virtues that has made Akwa Ibom State unique and outstanding in Nigeria. They have been further advice to shun vices that are capable of truncating their futures, and rather commit themselves to Godliness and positive social values that can contribute in moving the state forward. These and many more were handed down by the quest speakers at a One Day Sensitization Program on the theme ” From Armed Struggle to Pen Struggle “. A Panacea to Economic and Nation Building organized by the Supreme Council of Students World Wide President Eket Senatorial District for the students of the school on Friday, March 16, 2018. 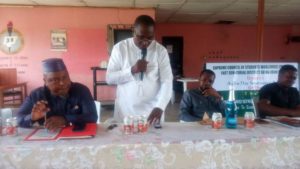 In his welcome address, chairman Council of World Wide President, Akwa Ibom State comrade Friday Edemumo thank the school management for approving the venue for the program as well as the stakeholders for endorsing the event and called on the students to sit tight and enjoy the program.
While charging the students not to involve themselves in acts that are capable of truncating their academic pursuit in life, Dr. Mrs Akon Eyakayin, former Minister of Lands and Housing, presently the Governing Council Chairman, Akwa Ibom State Polytechnic Ikot Osura who was the Chairman of the Occasion and quest speaker, spoke on the interactive topic Girls Child Education and Impact on Nation Building, mentioned that the education of a girl child can never be overemphasized in our modern day society and called on parents and stakeholders to take girl child education seriously. 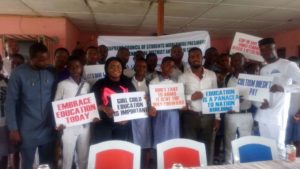 Dr. Mrs Eyakayin ably represented by Hon. Osuiniabasi Alfred, Special Assistant to Governor Udom Emmanuel on Projects, hints at the African proverbs that said if we educate a boy we educate a person but if we educate a girl child we develop the family and the whole nation remains valid.
He went further to intimate the students that educated women tends to have fewer and healthy children. A 2000 study in Brazil shows that literate women had two or three children while illiterate has six children according to UNESCO.
So, I’m here to charge the girl child sited here to hold tight to education pursuit and I see God giving you the enablement. He added. 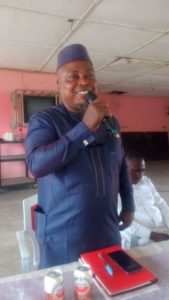 Presenting his goodwill message at the occasion, the Leader of Eket Senatorial District Elders Forum, Former two term House of Representatives Member and Minister of Lands and Housing Chief Nduese Essien, thank the students leader for the choice of the school for the sensitization program and called it timely. He also thank His Excellency Governor Udom Emmanuel for selecting the school for renovation which is ongoing and advised the students to take the free and compulsory education serious to advance their academic achievement.

Chief Essien who was represented by Mr. Tony Udo frown at the proliferation of cult groups in schools and describe the situation as very sad.
He attributed the inclination by students to join such groups as a result of self confidence and esteem.
Mr. Udo counseled the students to shun cultism and to support their school authority to eradicate such mance now that the governor has recently outlaws over thirty three cult groups in the state.
Chief Nduesoe Essien directed me to pick three of you base on your merit performance in this program for a scholarship support and today I have picked Miss Idongesit Bassey and two others. He added.
Also speaking, the principal of the school Mr. G Ekong who was represented by Mr. Anderson asserted that I want to let you know that in our school we are doing our very best our students have not been involved in cultism, we are doing our best to trained them.
I have seen the theme of this program and I want to advice all the students here to take this sensitization program seriously.
Further speaker at the occasion, PRO NANS ZONE B, comrade Mike Ibanga exposed the students to the hazard of cultism like drop out from school and premature death and asserted that as a young person immediately you are being initiated into cultism, let’s no body deceives you you have sold your soul to the devil and counseled the students to stay away from cultism and drugs abuse.
In her closing remarks, the Chairlady, of the forum comrade Goodness Lambert who led the students leader delegation on a one day sensitization campaign to the school expressed gratitude to the representative of the Governing Council Chairman AKPOLY, other dignitaries present, the Principal, her colleagues as well as the students of the school, very specially Rt. Hon. Chief Nduesoe Essien for finding time to grace this epoch marking occasion, it shows the love you have for the Nigerian students.
Lambert said, indeed, there was an earnest need to sensitize the students on the need to shun cultism, violence and other social vices, as well as armed and believe in education, believe in pen as a very strong tool of societal change and nation building. Perhaps it is very alarming at the rate our young people has taken to Drugs, Cultism, Rape, etc. I think the resource persons on the wonderful presentation and we share in the joy of lessons learnt.
Conducting the students leader delegation on a facility tour at the school compound shortly after the event, She lauded His Excellency Udom Emmanuel administration for what she describes as tangible demonstration of good governance, massive renovation of the school, provision of wealth creation opportunities and contributions towards the welfare of the students.
The Chairlady, also thanked Chief Nduesoe Essien and Dr. Mrs Akon Eyakayin for their financial unflinching support to the students activities of the forum as well as life changing counsels describing them as a student friendly father and mother.