IN THE NEWS: AKPABIO NOT IN HIS RIGHT SENSES, ESSIEN UDIM PEOPLE PLEAD FOR FORGIVENESS

……………..The entire people of Essien Udim Local Government Area of Akwa Ibom State have asked the state Governor, Mr Udom Emmanuel, to have mercy on the atrocities committed by his predecessor, Sen. Godswill Akpabio, against the state. 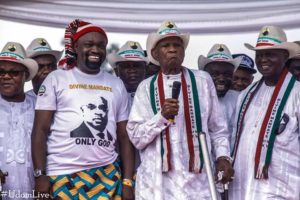 Speaking on Monday during the Divine Mandate Campaign rally at the Council Secretariat, Afaha Ikot Ebak, the people who stormed the venue to show appreciation for the excellent performance of the Governor, stated that the former governor needed prayers.

They said they don’t know what the opposition All Progressives Congress (APC) has done to Akpabio that warrant his misconducts against indigenes of the state in its entirety within the last couple of months.

According to them, the greatest achievement of Godswill Akpabio’s eight-year tenure was his choice of Udom Emmanuel as his successor. 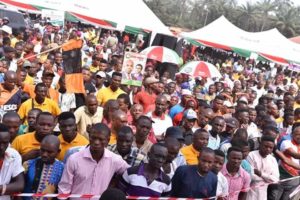 They expressed sadness why the position of Essien Udim people to support the Governor for eight years has become a crime which they said, warranted Akpabio relocating the Essien Udim Police Station to Ikot Ekpene where he orders the arrest and detention of the youths on a daily basis.

The political leader of the area, Chief Michael Afangideh, maintained that Godswill Akpabio brought Governor Emmanuel who came and cleansed the of cultism, kidnapping, assassination and other anti-societal vices, restoring peace and order in the state. 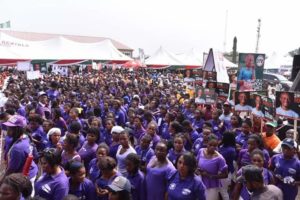 He said Akpabio has no satisfiable reasons to attack Udom Emmanuel for restoring sanity and development in the state if he meant well for his people, and assured Governor the support of Essien Udim elders for his second term in office.

He cited the Sunshine Batteries which was attracted to the state by the then Cross River State Governor, late Clement Isong, an Onna man, as the only industry in Essien Udim.

“Unfortunately, our brother governed the state for eight years without attracting any industry not even in the let alone Essien Udim his home town. Since it is the duty of Onna governors to bring industries to Essien Udim, we have decided to support you for eight years.”

Also speaking, the Executive Chairman of the Council, Hon Elder Raphael Isobara, assured the total support the entire Essien Udim people because they know the area will stand on the positive side when the Governor might have finished rewriting the history of Akwa Ibom State. 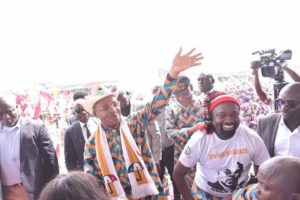 “We have no reason not to support your right-year tenure as justice and equity demand because we never had it this better even when our son had the opportunity.”

Responding, Governor Udom Emmanuel thanked the people for the show of love and assured them of better days in his second term as he discovered that the youths of the area were misled.

He said youth empowerment was missing in Essien Udim, and promised to give them all their benefits, as he focuses on making Essien Udim an investors haven.

Governor Emmanuel announced that the state government has ordered machines from Malaysia for the establishment of palm kernel and crude oil crushing plant in Essien Udim, adding that the Nto Ubiam road which leads to Catholic Bishop Umoh’s house has been awarded for construction. 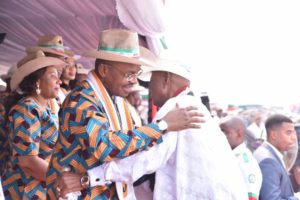 The Governor enjoined the people to beware of someone who, after stabbing, turns around and cry for help. “This journey is like a relay. It rotates until it gets to the promised land. Beware if someone who, after handing the mantle, turns to be a hindrance to you.”

Over 500 dumped the broom party and joined forces in support of Governor Udom Emmanuel and PDP candidates in the forthcoming elections.

The Divine Mandate Campaign trail moved to Abak local government area where the Governor was received by mammoth crowds of people.