IN THE NEWS: ATIKU ASSURES ON RESTRUCTURING, PROMISES REFINERY FOR AKWA IBOM

………….The presidential candidate of the Peoples Democratic Party, PDP, Obong Emem Atiku Abubakar says he is committed to restructuring in order to liberate the country from the clutches of economic backwardness. 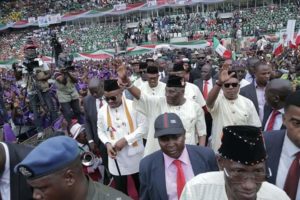 Alhaji Abubakar has also promised to cite a petroleum refinery in Akwa Ibom State to ensure availability of fuel and stop dependence on importation of petroleum products from other countries.

The presidential hopeful stated these at a Presidential campaign rally held at the Nest of Champions in Uyo, Monday.

Abubakar who bagged the royal title of Obong Emem (King of Peace) of Akwa Ibom from the state council of chiefs, said his relationship with Akwa Ibom dates back to his friendship with Obong Victor Attah in 1998, maintaining that Akwa Ibom remains his second home. 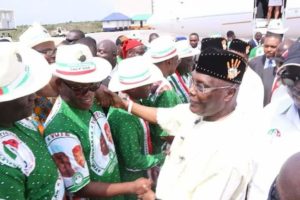 The former vice president said that he was highly detribalized, and disclosed that his personal photographer of many years, Udim hails from Akwa Ibom State.

He promised to give adequate attention to all parts of the country in his administration, but
singled out Akwa Ibom as one of the best states with beautiful people and abundant resources. 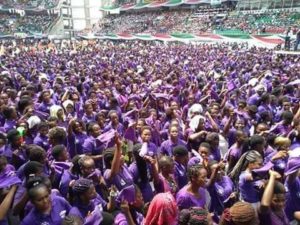 He described Governor Udom Emmanuel as one of the best Governors in the country, and urged the people to vote PDP all the way and to return Governor Emmanuel to continue the development of the state as the most performing Governor in the country.

He said that he would partner Governor Emmanuel to attract investments to the state to create jobs and stimulate growth in the economy. 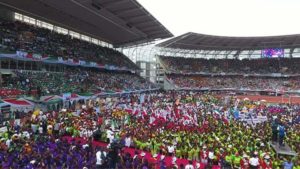 Atiku Abubakar who is the Waziri Adamawa lamented that the APC has crippled almost all democratic institutions and mortgaged the economy thereby making Nigeria to become the poverty capital of the world with many people losing their sources of livelihood.

He rued the decay in the educational sector, rise in insecurity as well as the abuse of the fundamental rights of the citizens, maintaining that these anomalies should compel every patriotic Nigerian to support the emergence of the PDP led government to restore the lost glory of the country and get Nigeria working again for youths and women to have a source of livelihood and not depend on handouts. 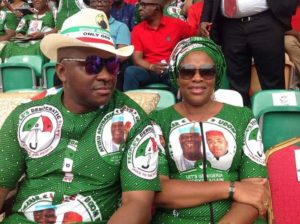 The Vice Presidential candidate, Mr Peter Obi said he was happy to have married from Akwa Ibom, and expressed the hope that as an inlaw, the people will stand firm with PDP and justify with votes to actualize the mandate.

Earlier, Governor Udom Emmanuel had called on Nigerians to study the Economic blueprint of those who want to lead Nigeria and not be overwhelmed by partisanship and intimidation while the country cruises to precipice.

He said it is the development plan that attracts supporters not sentiments and painful record of abuse of democracy as perpetrated by the current APC led government. 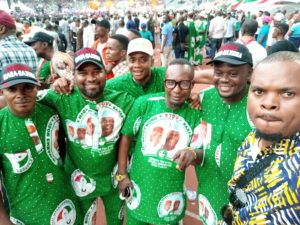 Gov Emmanuel said Alhaji Abubakar is ready to build a future for human capacity development and guarantee the Rule of Law and not totalitarianism and nepotism as is presently witnessed in the country.

Governor Emmanuel said that Atiku understands the economy and investment and if elected, the country’s Gross Domestic Product would improve and Foreign Direct Investment would increase to boost job creation, enterprise and sustainable future for Nigerians.

He said the rally is to enable the people enter into a social contract and affirm their support.

He reeled out his score card of performance, and assured of more impactful leadership.

The National Chairman of the PDP, Prince Uche Secondus who was delighted at the massive turnout affirming that Akwa Ibom remains a PDP state, urged the youths to vote and be ready to defend their vote to redeem the country from dictatorship and restore democratic culture.

The National Youth leader of the PDP, Hon. Sunday Udeh-Okoye said that only in APC government that snake swallowed money and rodents held Aso Rock to ransom while the Secretary to the Government of the Federation awarded contracts for grass cutting at a whopping tone of more than Three Hundred Million, yet still walking free.

The youth leader lamented that the Chief Justice is sacked without reference to constitutional provisions simply because he is from the south south and called on the youths to be ready to defend themselves in the face of any intimidation and brazen dictatorship and vote out an unconscionable administration.

Okoye said if the youths fail to act now, the mess created would rest squarely on our shoulder.

The State Chairman of the PDP, Obong Paul Ekpo said that all the thirty one local govt areas and 329 wards in the state are ready to vote PDP while Senator Bassey Albert assured that Akwa Ibom is PDP and no other party is deeply rooted in the state.

The Speaker, Akwa Ibom State House of Assembly, Barr. Onofiok Luke said that the response of the people and the enthusiasm radiated were convincing evidence that no Man can subvert the will of the people.

The First Lady of the state, Mrs Martha Emmanuel said that Akwa Ibom is Atikulated and her visit to all the nooks and crannies of the state affirms that there is no other party except PDP and told the people to hold fast their faith in the umbrella to reduce suffering and poverty through a sound economic programme that would engender sustainable growth, education and healthcare for the people.

The wife of the Vice Presidential candidate, Mrs Margaret Peter Obi appealed to the people to ensure victory for the PDP and as a daughter of Akwa Ibom, more developments would be attracted to Akwa Ibom, her home state, which she acknowledged as the fastest growing economy in Nigeria and West Africa.

In a Goodwill message, the National Legal Adviser of the PDP, Barister Emmanuel Enoidem said that Nigerians now have a reason to heave a sigh of relief with the entrant of Alhaji Atiku Abubakar having witnessed the failure of a man who promised candy but ended serving the people pains.

High point was the presentation of the flag by the National Chairman of the PDP, Prince Uche Secondus to Governor Udom Emmanuel.

Earlier on arrival at the Victor Attah Int’l Airport, the presidential hopeful commissioned the vegetable Green House Farms and gave Governor Udom Emmanuel a pat on the back for the vision to diversify the economy through Agriculture rather than rely on federal revenue allocation as an oil producing state.