IN THE NEWS: GOV. EMMANUEL MEETS WITH MBOHO MKPARAWA IBIBIO; SHEDS LIGHT ON DEATH OF IT PRESIDENT

…………….Akwa Ibom State Governor, Mr Udom Emmanuel, has commiserated with the leadership of Mboho Mkparawa Ibibio, a foremost Socio-Cultural Organisation in the state over the demise of the International President, Late Etubom Mkparawa Monday Etukakpan. 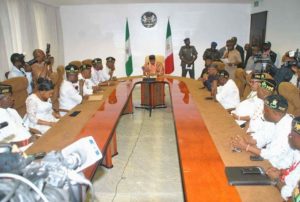 Governor Emmanuel gave the condolence during an interaction with Executive members of the organisation led by the Vice President 1, Akparawa Obong Patrick Udofia in his office.

The Governor expressed sadness over the loss of a vibrant young man who had contributed to the unity, peace and development of the state and rose to the echelon of Mboho Mkparawa Ibibio as it International President. 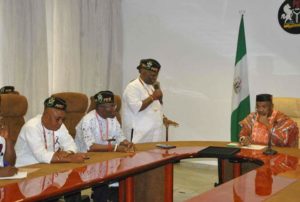 He wondered why people should make capital of a medical situation where best hands in the medical profession including his personal physician were deployed to ensure that the patient come out of coma .

Hear him, “I have very experienced hands as a team of medical experts. Immediately i was alerted at a point of his unconsciousness, I directed the Commissioner for Health Dr Dominic Ukpong to hire available Air Ambulance for him to be flown out of the country for medical attention but the team of Doctors said that his state of health did not allow for such trip as his unconsciousness was progressing at a fast rate and there was no Air Ambulance that could sustain him at that condition to the destination.

We released the best Doctors we had including my personal Physical who stabilised the patient to consciousness at the hospital. I am yet to be told if there is any equipment that we needed that we didn’t have.

Fortunately it was the same Neurosurgeon who carried out six brain surgeries in one night when we had the Reigners Bible Church building collapse that handled the case. All the six people operated upon as at that time are alive today.”

The Governor said that autopsy conducted on the patient indicated that the deceased passed on as a result a medical condition known as embolism; simply put, blood clotting which can occur to any person in such a situation.

He said , “apparently that is why immediately he passed on, I ordered for autopsy to be carried at the Teaching Hospital and I got the result. What happen happens anywhere on planet earth ; embolism.

At times it happens to people who are at work. I’ve had the experience of a person who was at work in the morning by afternoon she was in the mortuary. The young Lady had some pains on the leg and took analgesic not knowing that blood was clotting, within a short period she passed on.

Governor Emmanuel who expressed surprise at the spate of negative comments trailing the Quaternary Medical Center where the deceased received treatment before the unfortunate incident, particularly frowned at the attitude of some people who went on internet to feast on the incident regardless of the deceased standing and privacy.

He maintained that Ibom Specialist Hospital remains the best in terms of personnel, equipment and services rendered.

“The Neurosurgeon did not come with any equipment, Every single equipment he needed we have it here and the people we selected to manage the hospital for now are the best we have in this state. From Nurses to Technicians managing the facility. We need to operate those equipment on 24hour basis pending when we will hand over to original managers. We have just signed MOU with Clinotech Group of Canada to take over the management of the hospital.” He explained.

Governor Emmanuel used the occasion to commend members of the Organisation for the support given to the deceased and his family and warned people to desist from from speculating information capable of misleading the unsuspecting public.

Earlier, Akparawa Obong Patrick Udofia said that the Mboho was deeply touched by the demise of it leader whom he said had successfully piloted affairs of the organisation in a period of 46 out of the regular 48 months as stipulated by the constitution.

He added that Akparawa Etukakpan had begun the process of change of baton in the leadership of the Mboho before his sudden demise and thanked the Governor for his efforts towards the recovery of the late President, stressing that if it were possible to buy life for him to survive, the Governor would have spared no dime.

Akparawa Udofia expressed appreciation to Governor Emmanuel for his solidarity with the Mboho and assured him of more support from the Organisation.

Present at the occasion were Senator representing Uyo Senatorial District, Akparawa Obong Bassey Albert and some members of the State Executive Council.