…………….Governor Udom Emmanuel has reassured that his administration will continue to pay premium to qualitative education promising that the state will take the lead in the next national senior school certificate examinations in the country. 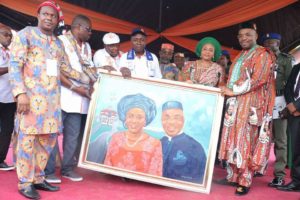 During a mega rally and reception in his honour by youths of the old Abak Division comprising five local government areas, Governor Emmanuel who pledged to continue rebuilding education infrastructure to give rise to qualitative learning in the state, announced the availability of another opportunity for youth training on technical areas. 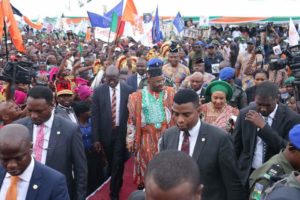 The rally at the Abak township stadium, which featured a defection of over 20,000 members of the All Progressives Congress to the Peoples Democratic Party and endorsement of the Governor’s re-election, was witnessed by a mammoth crowd of supporters from around the entire state.

A visibly elated Governor Emmanuel, flanked by his wife, Martha, explained that his administration has just signed an agreement for the establishment of a Technical Centre worth about 18 million dollars to be located around the Mkpat Enin and Oruk Anam Local Government axis, and said the project will commence in the next few weeks. 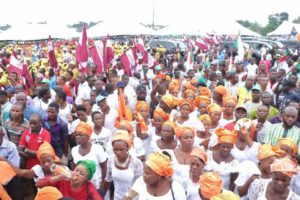 The Special Technical School located at Oruk Anam, the planned Industrial Estate in Abak and the Launching of a Pilot Scheme May this year to make sure at least minimum of two Local Government Areas in Abak 5 have electricity round the clock through the extension of transmission lines from Ikot Ekpene to Ekparakwa in Oruk Anam are some of the efforts aimed at the development of Abak 5, the Governor explained. 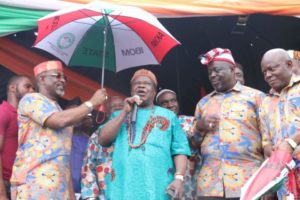 He decried the current situation that when oil is needed, Akwa Ibom becomes the location but when directors are wanted in the Nigeria National Petroleum Corporation NNPC, those in authorities look elsewhere was not in the best interest of the state.

Governor Emmanuel stated that the only evidence he wants to show Nigeria is that by next year’s Senior School Certificate Examination, the best result will come from Akwa Ibom noting that the State Government has tried to galvanize and make sure employments are generated for the people. 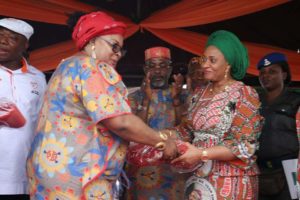 Governor Emmanuel while listing some of his achievements in the five local government areas of the old Abak division, including major road infrastructure explained that he had earlier assured his predecessor that those things he could not complete during his tenure would be handled by the present administration as government is a continuum. 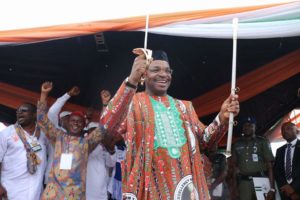 Governor Udom Emmanuel thanked those who decamped to the PDP and noted that their action marked the end of any other political party in the state.

The Governor also commended the organizers and the entire people of the area for the endorsement and the reception for him and the wife.

Governor Emmanuel who advised those nursing ambitions for elective offices in 2019 not to go against zoning which the party professes, and encouraged the youths to lay down their arms and embrace peace, unity as well as development. 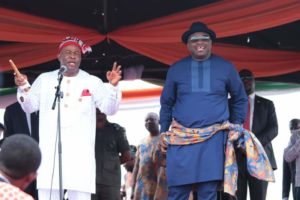 He thanked the Senate Minority Leader, Senator Godswill Akpabio, other legislators from the state, Commissioners and other stakeholders for taking part in the event.

Earlier, the Chairman on the occasion and PDP National Legal Adviser, Barrister Emmanuel Enoidem in an opening remark said the highpoint of the reception was for the people of Abak 5 to collectively endorse the Governor, their In-law, for a second term in office beginning next year. 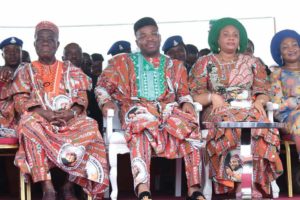 The National Legal Adviser said the approval for a second term was occasioned by the capacity, ability, uniqueness, achievements in each of the five points agenda of the Governor and many other sectorial successes by Governor Emmanuel in less than three years in office.

Barrister Enoidem said the Governor had consolidated on Infrastructural development while working to inaugurate the first fertilizer blending plant in Abak and shown that it is possible for a successor to lead the state without rancour with his predecessor in office. 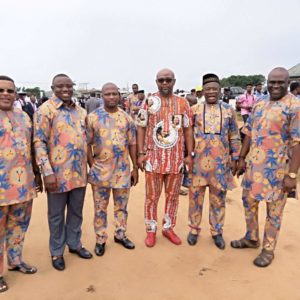 According to the former Commissioner, “you are a man chosen by God and no man is strong enough to take the mantle away from you. Do not be intimidated, Obong Victor Attah did 8 years, Godswill Akpabio did 8 years and your own will not be different.”

He pronounced the endorsement of Governor Emmanuel for a second term in office, reiterating the resolve of the five local government areas to deliver 300,000 votes to the Governor in 2019.

Barrister Enoidem also announced the endorsement of the Senate Minority Leader, Senator Godswill Akpabio for a second term as approved by the people of the five local government areas, because of his superlative performance in the red chamber.

The former APC members while speaking through their leader, the Director General of the party’s state Campaign Organization in 2015, Obong Sunny Udom, said over 20,000 of them left the APC because it has failed Nigerians and had no strength in the state.

The decampees explained that they heard about change which turned out to be a case of jumping from frying pan to fire hence their decision to return to the umbrella which is a very good symbol of shelter and comfort.

Obong Sunny Udom, a former Chairman of Ukanafun local government, and former member of the House of Representatives, said the APC does not have any candidate for the governorship election next year. “I was the Director General of their campaigns and I know that their house is not in order, because they forgot people who worked and laboured to make APC what it is.”

The APC goons stated that the Governor has no problem in terms of 2019 election in the state, but encouraged him to continue to have compassion on people and sued for peace.

Obong Udom formally handed over the 20,000 APC members with their brooms to the State Chairman of the Peoples Democratic Party, PDP, Obong Paul Ekpo who received them back to the fold in Akwa Ibom State, and advised them never to go back to their former party now that they have discovered the truth.

The State Chairman of PDP, Obong Paul Ekpo thanked the youths of Abak 5, elders, women and other stakeholders for organizing the event noting that it was a further proof that the ruling party is like a religion in Akwa Ibom State.

The Party Boss stated that the Governor’s good works brought the people back to him in PDP in view of the fact that the party was leaving positive footprints in the state.

Also speaking, the Senate Minority Leader, Senator Godswill Akpabio who intermittently sang while giving his response, thanked the people for giving him the go ahead to the Senate from next year to 2023.

He stated that the projects he inaugurated in the past three years were to compliment the efforts of Governor Emmanuel and assured him of success in 2019 Gubernatorial elections.

Senator Akpabio said, “I came as a witness to see the mammoth crowd that appreciates what God has done in Akwa Ibom State under the leadership of Mr Udom Emmanuel.”

He recalled the lineage of the Governor’s wife which revolved around Ikot Ekpene Senatorial District and described the chief executive of Akwa Ibom as a true In-law of the district.

The Mega Rally and Reception which climaxed with the endorsement for a second term also featured the presentation of a sword, staff and other symbolic items to the Governor by the youths while the Abak 5 women presented gifts to the First Lady.