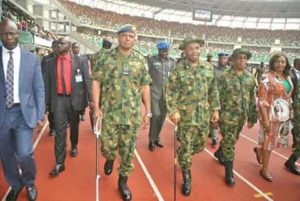 The Governor who stated this at the commencement of the NAF competition at the Godswill Akpabio international stadium, Uyo noted that combat readiness through regular physical exercise represents one of the ways to confront the security challenges currently facing the country.

Governor Emmanuel pointed out that it was not possible for the participants to be good military officers without necessarily challenging themselves to proper physical exercises. 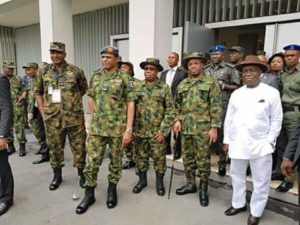 The Governor recalled the essence of physical fitness in the military service as captured by George Marshall, a leading figure who helped in rebuilding Europe from the ruins of the second world war, and encouraged leaders to maintain a physical fitness that allows them to fulfil their command duties despite the fatigue. 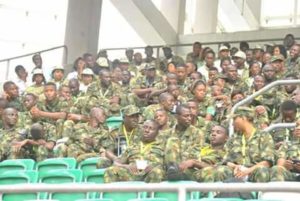 On his government’s commitments to sports development, he said, “my administration regards sport as a key aspect in our Dakaada philosophy. We want to encourage our youths to aspire for greatness and sport is one of the ways that they can achieve this success. That is why we have invested enormous resources in sports development.”

According to the Governor, modern facilities were being built in all the ten Federal Constituencies in the State for sporting activities.

The essence, the Governor explained, was to ensure earlier exposure of Akwa Ibom youths to those facilities, train them and deepen their God given talents with those infrastructure.

He said his Government will continue to invest seriously in sports development and thanked the sport community for recognising the efforts of his administration in that direction by bestowing the best sport state, best sport Governor, best sport infrastructure state in 2017 on Akwa Ibom.

Governor Emmanuel attributed the heights attained by the likes of Usain Bolt, Ronaldo and Lionel Messi among others to early exposure to the needed sporting facilities hence the resolve of his administration to provide sporting infrastructure across the state.

The Akwa Ibom Chief Executive also gave plaudit to the Nigerian Armed Forces for their gallant efforts in confronting security threats posed by some miscreants in the country saying that the good people of Nigeria are grateful to them.

He also thanked the Chief of Air Staff, Air Marshal Sadique Abubakar, Chairman of the 3rd NAF Combat Sports Competition Planning Committee, Air Commodore N. U. Ekpoh and others for selecting Akwa Ibom State as center for the event.

The Governor however noted that the ongoing Airforce competition in Uyo was the 3rd of such events in Akwa Ibom during his tenure, after that of the Police and Navy and expressed optimism that the Army would also find the state as a comfortable abode for similar competitions.

The Special Guest of honour and Governor of Cross River State, Senator Ben Ayade said the event was germane in the current efforts of the Nigerian Airforce in attaining professionalism and fitness of body and soul of personnel.

The Governor, represented by his Deputy, Professor Ivara Esu, observed that the timing of the competition was not only apt but key to the development of professionalism in the Nigerian Airforce saying that the essence of physically fit personnel underscores the need to always engage in sporting activities.

According to him, “even more important is the fact that an event of this nature is organised to promote and inculcate core values of integrity, excellence and service delivery because it is when personnel are fit that effective service delivery can be assured.”

He urged the federal government to intensify the fight against security threats in order to ensure a free, safe and egalitarian country.

Governor Ayade promised that the Cross River State Government will not relent in its determination to support the professional and welfare needs of the personnel, and thanked the Akwa Ibom State Government for taking the leadership in hosting such a competition and putting the region on the map in terms of sporting facilities.

In a keynote address, The Chief of the Air Staff, Air Marshal Sadique Abubakar explained that the idea of Combat Week was predicated on one of the key drivers of his vision for the Nigerian Airforce which is to focus on comradeship and regimentation.

Air Marshal Abubakar expressed the hope that by organizing the competition, personnel would continue to maintain high levels of physical fitness, mental alertness and combat readiness in discharging their duties.

He told the Officers and Men of the Airforce that the Combat Sports Week will ensure that they remain mentally and physically prepared to perform their respective tasks, not only effectively but efficiently assuring that the exercise will produce sound minds and bodies to deal with security challenges facing the nation.

“The Nigerian Airforce in the last two and a half years or thereabout has restructured, built capacity of both Air crew and non Air crew, reactivated and procured aircraft, all to ensure that personnel are repositioned to function professionally.” The Chief of Air Staff stated.

He announced that the performance in various status of conflicts within and outside Nigeria was a clear testimony of commitment by NAF to ensure that Nigeria and its citizens were secured.

Air Marshal Abubakar urged them to continue with the good work and resist the distraction of politicization of security issues that is awash in the social media platforms and encouraged citizens to resist the call for anarchy and show compassion and respect to law abiding Nigerians irrespective of their social affiliations.

He said NAF will continue to work hard to ensure that the people and communities are secured and acknowledged the support of Governor Emmanuel alongside the hospitality of the people.

The Chief of Air thanked President Muhammadu Buhari for his unflinching support to the growth and development of the Nigerian Airforce.

In an address, the Chief of Administration, NAF Headquarters, Air Vice Marshal Ibrahim Yahaya, applauded the Chief of Air Staff for introducing combat sports competition to Nigerian Airforce schedule of events noting that it will remain highly remarkable.

Air Vice Marshal Yahaya said, “After the maiden edition at Kaduna in 2015, the second edition was conducted in 2017 at Jos and the third edition for 2018 is what we are here to witness in the rapidly developing city of Uyo.”

He stated that the Headquarters of the Nigerian Airforce and the participating six Commands with their contingents were expected to make the eight events programmed for the 3rd edition to be true reference point for a healthy competition.

The competition, according to the Chief of Administration, affords the NAF, Akwa Ibom people and those from the neighbouring states the opportunity to interact and sustain the good relationship enjoyed over the years as well as promote better civil-military relationship in Nigeria.

March past by the seven contingents of the Nigerian Airforce, hoisting of the Combat Sports flags, oath taking and administration by officials and contingents, combat relay race for the male 4 × 400M and cultural display were some of the highlights during the opening ceremony.

Earlier in the day, the Chief of Air Staff had led a delegation on a courtesy visit to Governor Emmanuel at Government House, Uyo before proceeding to the stadium.