IN THE NEWS: UNIVERSITY OF IBADAN CONFERS AWARDS ON GOV EMMANUEL, EPHRAIM INYANG

…………..In recognition of the existing peace and good governance in Akwa Ibom, the University of Ibadan (UI), has conferred an Award of Honour to Governor Udom Emmanuel. 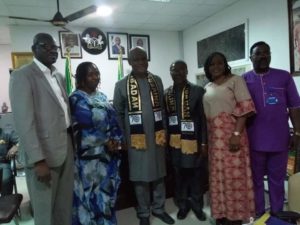 The institution recently celebrated her 70th anniversary. The event featured conferment of awards on exceptional alumni and distinguished Nigerians that have made the country proud.

According to the Chairman, 70th Anniversary planning Committee for the University, Prof Emilolorun Aiyelari, who was accompanied by a cross section of the staff of the institution, Governor Emmanuel is a peace-loving leader and great achiever who deserves to be honoured not just by his people. 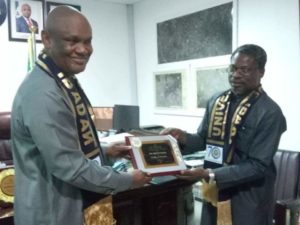 He made the remark in Uyo, before presenting a plaque to the Governor, represented by his Commissioner for Works, Mr Ephraim Inyang-Eyen.

Also honoured with “a Worthy Ambassador Award” by UI was the Works Commissioner, himself, an alumnus of the institution.

Prof Aiyelari lauded the governor for his developmental efforts, especially in areas of infrastructure and human capacity development as well as appointing an alumnus of the institution to oversee the Ministry of Works.

“We are highly elated that our own alumnus (Ephraim Inyang-Eyen) is working hard for the development of his state as a Commissioner”, he said.

Continuing, Prof Aiyelari said, “We urge you to continue to give your best. “Please continue to spread the happiness that you were known for”.

Responding, Inyang-Eyen lauded the institution for recognizing efforts of the governor and declared that based on merit, all the projects constructed and executed by Mr Udom Emmanuel remain a model and unparalleled among similar projects anyway in the country.

He described Emmanuel as the type of leader needed for the rapid development of the State.
Inyang-Eyen further explained that the State Chief Executive was focusing on the development of all communities, kindness to all politicians, irrespective of their political affiliation, and display of uncommon maturity in all political situations.

“Whatever we’ve done that deserved these honor, I assure we’ll work harder. We’ll work and ensure this honor is not in vain… On this note, I thank you on behalf for the governor for this award”, Inyang-Eyen noted.