………….It was a sad moment for the family of the national officer of Peoples Democratic Party, Engr. ( Obong ) Mbosowo Orok, when the women of Nsit Ibom under the umbrella of Nsit Ibom women stakeholders visited the family to express their sadness and condole with them on the demise of their mother, Late Obongawan Anni Orok. 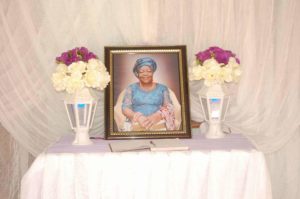 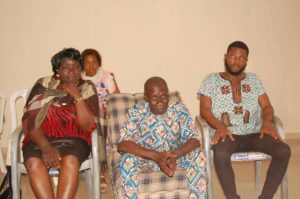 She described death as a harrowing experience saying that one cannot contain the grieve of loosing a loved one in a moment.

The Former Governor’s wife said that the news of Mrs Orok demise was shocking to them as we had met with the sister in the previous occasions coordinating for the party successes ahead of the general elections, only to be told two days later of her demise. 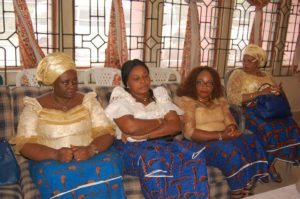 She acknowledged that no man can console them except God who is there for the family and regretted her absence explaining that the women would missed the deceased particularly her wise counsel as a women mobilizer in the Local Government, State and Nigeria at large.

The women in their prayer session led by press secretary office of the First Lady, Mrs. Amayo Umoh prayed for God protection for the family the deceased has left behind.

Mrs. Umoh dedicated time in prayer for God’s grace, blessings and peace throughout the period of the funeral which is slated for Friday, July 27, 2018.

Earlier, Engr. ( Obong ) Mbosowo Orok, on behalf his family thanked the women stakeholders in Nsit Ibom for the visit and solidarity.

He hinted that he was happy for fact that his wife has lived a fulfilled life and thereby leaving an indelible marks on the sands of time and invites the women to come enemas on Friday to join him bid farewell to his wife in grand style.