……………………Stakeholders of the Peoples Democratic Party (PDP), Uyo Local Government Area, have once again risen in unison to drum support for the administration of Governor Udom Emmanuel, his second term bid in 2019 and the Commissioner for Information and Strategy, Mr. Charles Udoh. 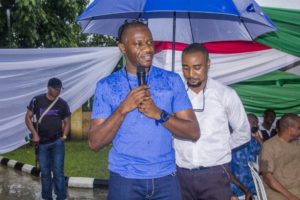 This was disclosed on Sunday at the residence of the Commissioner for Information and Strategy, Mr. Charles Udoh when he hosted his kinsmen in the PDP to a get-togther.

In his remark, the host, Mr. Charles Udoh expressed delight for the love and support exhibited by the people of Uyo Local Government Area toward the administration of Governor Udom Emmanuel and urged them to do more in protecting the interest of the Governor at all times. 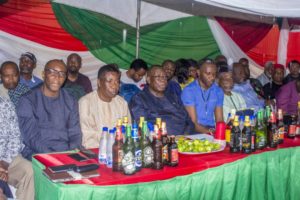 The Commissioner who is from Obio Offot village in Offot Ukwa Clan, recalled that though the stakeholders’ meeting was long overdue because of his busy schedule, he was happy for the patience and understanding of his kinsmen and promised to carry everybody along in the scheme of things.

“This meeting was long overdue. I felt as the highest political office holder in the Local Government, it was necessary for me to gather my people and show myself to them.

“It is gratifying to know that my people are hundred percent behind Governor Udom Emmanuel’s administration and his second term and they have also given me their words in protecting me in everything I do in the course of projecting the Governor for 2019.”

The Commissioner averred that the landmarks of Governor Udom Emmanuel’s administration are there to compare what the PDP led government has been able to achieve in the state and that of APC at the national level.

In his speech, the Political Leader of Uyo Local Government Area, Dr. Valentine Attah said the people of Uyo have no benefit supporting any other person apart from Mr. Udom Emmanuel.

“I was with APC members in my village and we spoke with one voice that we are going to return Governor Udom for second term. Any Uyo person who is in APC is an ambassador of PDP.

“We are supporting the Governor because he is the first person who understands good governance in terms of sustainable development. We want to learn and understudy his power of governance.”

The Political leader of Uyo called on his people to protect political appointees from the local government rather than castigate them openly.

He described Commissioner for Information and Strategy, Mr. Charles Udoh as a good man and promised to support him at all times.

Prince Uwah revealed that the people of Uyo Local Government Area has never had it so good in terms of political appointment than now, and advised everybody to rise in defense of Governor Udom Emmanuel’s administration and his second term.

The former Commissioner promised to fight whoever moves to push Mr. Charles Udoh down in his bid to serve the state, while also warning returnees to the party not to cause problem with others who have remained steadfast.

In his re/action, the PDP Vice Chairman Uyo Senatorial District, Elder Imoh Okon said the victory of PDP at the supreme court was a great breakthrough for the party and called on all the party men and women to support Governor Udom Emmanuel to succeed. 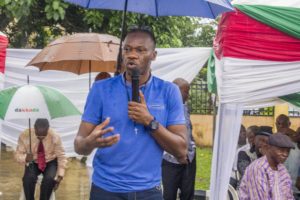 The party leader reminded members of the upcoming PDP delegates election in the state and urged all of them to go to their various ward centre for what he described as “transparent delegates election” with a promise that no party person will be sidelined.