…………….Deacon RT. (Hon.) Nsikak Ikpe, says the impact of PDP redemption prayer summit will henceforth usher in a glorious era in Nsit Ibom Local Government Area, the PDP Chapter Chairman stated this on friday at the end of the 9th edition of Nsit Ibom redemption prayer at the party secretariat Afaha Offiong. 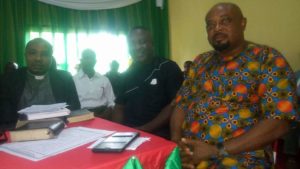 He used the occasion to thanked Prof. Nseabasi Akpan a University Don and former Commissioner of Education for coordinating and donation of cartoons of exercise  books and other writing materials to be donated to the secondary and primary school students of the area, also appreciate Hon. Ifreke Hanson, SA to Governor on projects supervision whom he described as a great mobilizer of women for donation and decorating the party house alter which God is dwelling with red color reception rock carpet worth hundred of thousands of naira and pray God to decorate the way of the Governor aides in return the same to higher political level and called for more participation by others stakeholders in the party.

Mr. Ikpe told the people that for over 2000 APC members  who returned back to the party last month is sign enough to believe that God is answering our prayers and calls for more steadfastness among the members, he added. 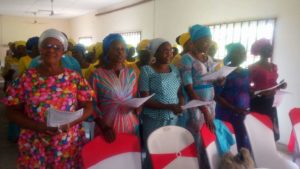 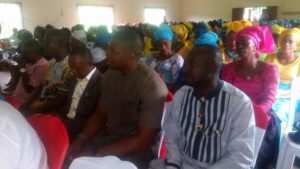 The solemn event begins with thanksgiving through chorus, praise and dancing offered to God by the congregation.

The clergy man, Rev. Victor Akanibok J.P, who set the ball rolling declared the 9th edition as manifestation and success for monthly prayer summit and call on congregational prayers against anything, individual or groups that may want to impede progress in the party and the local government. 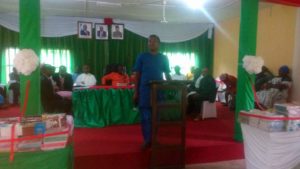 The preacher at the event Dr. Mfon Akpan who is also the Chaplin of the prayer summit mounted the podium made reference to the significant Bible characters who achieve breakthrough through thanksgiving and prayers preached on the topic keep shut and move forward announced that Nsit Ibom has come to age of deliverance and productivity.

He noted that, the party monthly solemn assembly has provided an opportunity for the party and the local government to step in turn around era of manifestation as well as realisation of great inspiration and visions. 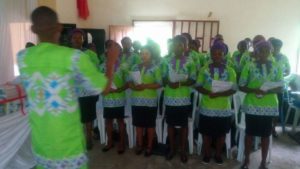 The man of God enjoined Nsit Ibom to be determined to reached it potentials noting that no nation place God first in its endeavours and meet frustration.

He read many Bible portion in addition to Isaiah 40:28-31 earlier read by Mrs. Glory Nsikak Ikpe the wife of the party chairman, and charged the people to excuse evil if the local government really need to shine in the state.

In his benediction, Rev. Fr. Ndinyene Paulinus ,the CAN Chairman Nsit Ibom invoke the grace of the Lord upon the land and the people of the area.

Highlights of the event was prophetic declaration, choir rendition by PDP glorious voice and presentation of many cartoons of exercise  books and other study material as part of empowerment to our secondary and primary school students to complement the ongoing free and compulsory education policy of Governor Udom Emmanuel Administration.