…………..It was an Inspirational moment in God’s presence as people from within and outside the state converged on Uyo Township Stadium, for the 2017 edition of Akwa Ibom State Christmas Carols Festival.

The event on Friday December 22, 2017 with performance by renowned Gospel Artistes across the globe ended in the early hours of Saturday December 23. 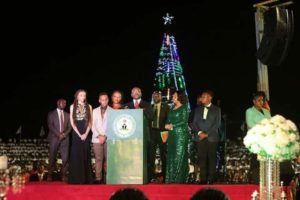 Addressing participants at the colorful event, the Akwa Ibom State Governor, Mr Udom Emmanuel, having declared the Carols Festival open, said the converge was to mark the birth of Jesus Christ and testify that God has been and will always be with the people of Akwa Ibom.

The Governor said that God’s presence was being felt in every aspect of his administration. “It is because He is with us that we have been able to weather the storms of recession and say there is a lifting up while elsewhere there may be a casting down”.

According to the Governor, “it is because He has been with us that while workers elsewhere are groaning in pains and penury due to infrequent payment of salaries, we have been able to pay the salaries of our workers as and when due. Not only have we paid salaries regularly, we have been paying the pensions and gratuities of our retired workers”. 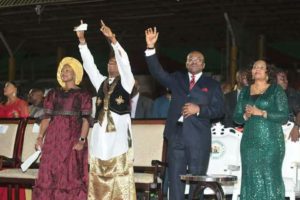 He said the state’s administration has been able to meet the basic obligations of governance and fulfill campaign promises of rapidly industrialized state.

The Governor further outlined the achievements of his administration in the areas of Industrialization, Infrastructure, Education, Tourism, Power, Health and Human Empowerment among others and explained that those were made possible because God is with Akwa Ibom State. 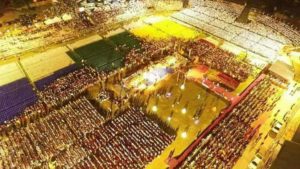 He assured the people that though the tidal waves of economic growth in the country may be rising and falling, the Akwa Ibom spirit will continue to rise and soar because of God’s presence.

The Governor advised the people of Akwa Ibom to make God the center of their joy and compass of their engagements and be gracious in their conducts, having been beneficiaries of God’s grace. 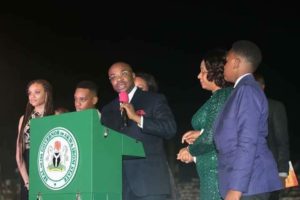 The Governor, accompanied by his wife, Martha and children, lit the Carols Festival Torch, flagged off the event and read the only Bible portion from Matthew Chapter one from verse eighteen down.

He paid tribute to the early missionaries who brought Christianity to this part of the world and applauded Akwa Ibom Patriarchs who helped to name the state after God and also lived to promote the Godly heritage of brotherhood.

The Governor described the theme of the festival, “Emmanuel! God Is With Us” as quite unique as God has been with Akwa Ibom from its creation and thanked both the military and democratically elected Governors of the state for laying a solid foundation for development.

The State Chief Executive thanked the people for coming out for the event and sued for continued unity to help sustain the tempo of development.

The event Coordinator and Permanent Secretary, Ministry of Culture and Tourism, Mr Aniekpeno Mkpanang drew analogy from the game of football and charged the people not to leave Emmanuel, whom he described as a game changer, on the bench.

He spoke of new records by the Akwa Ibom Carols Festival as shown on their website and welcomed the international, national and local artistes as well as choir groups to the event.

The Coordinator expressed gratitude to Governor Emmanuel for his unwavering believe in the relevance of the Carols Festival and the top government functionaries for identifying with the annual event. .

He acknowledged support from partners, the church and other volunteers whose contributions helped to ensure overall success of the festival but warned that those with interest in financial gains and self aggrandizement should stay clear as the carol festival is a non commercial project.

Preaching at the event, Pastor Agu Irukwu from the Redeemed Christian Church of God said the birth of Jesus Christ was in fulfillment of earlier prophecies and assured that in this season, God will remember the people.

Making reference to the Bible portion earlier read by the Governor, the Pastor said with the coming of Jesus Christ, that the waiting game was over, emphasizing that if people say that Emmanuel is with them, there should be signs.

Pastor Irukwu declared the peace of God upon the people for participating in praising and lifting up the name of God.

The Carols Festival which also featured the presentation of a goodwill message by the Chairman of Christian Association of Nigeria in Akwa Ibom, Reverend Ndueso Ekwere had top government functionaries, former Governors, Ministers of the Gospel and several other dignitaries within and outside the state in attendance.