………………………The Commissioner for Economic Development and Manpower planning, Mr Idorenyin Sunday Udo and the MD/CEO of Eminence Oil, Mr Emmanuel Okon have given the Akwa Ibom State chapter of the All Progressives Congress (APC) a shock of their own in Nsit Atai with the defection of their strongman from the area, Prince Sunny Elijah and wife Sarah, with over 2000 others to the ruling Peoples Democratic Party PDP in the state. 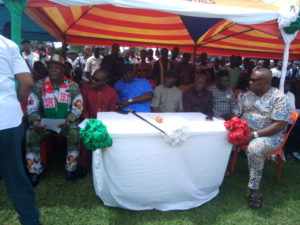 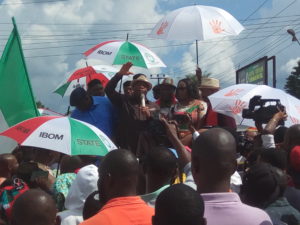 The defection which was the political handiwork of the Economic Development Commissioner, Mr Udo and Mr Emmanuel Okon took place yesterday, Thursday at Odot, the local government headquarters, and was attended by prominent sons and daughters of area.

Hon. Idorenyin Sunday Udo in his speech stated that Governor Udom Emmanuel is a performer because in Akwa Ibom State, payment of workers’ salary is not an issue. The Governor has entered into a developmental highway, different projects are commissioned.