………………………Rivers women joined the emerging tradition in the state as they stormed the Government House Port Harcourt on Thursday to endorse Rivers State Governor, Nyesom Ezenwo Wike for a second term.

Also, Rivers State Governor, Nyesom Ezenwo Wike declared that supporting the APC to form the Federal Government in 2019 is akin to digging the nation’s grave, as the country is already dead since they gained control in 2015.

Rivers Women declared that they will follow their endorsement with massive rural and urban mobilisation of all groups to vote overwhelmingly for Governor Wike in 2019.

The women in their thousands marched from Mile One to Government House, Port Harcourt, celebrating Governor Wike and creating awareness on his achievements. 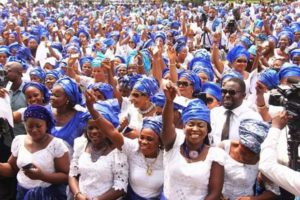 As they marched to Government House, Port Harcourt, they displayed banners and placards urging Governor Wike to seek re-election.

The women were drawn from the 23 Local Government Areas of the state, with each highlighting the projects executed by Governor Wike in their respective councils. 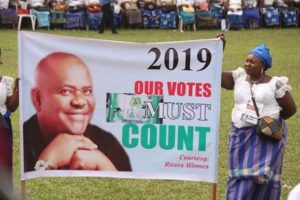 She assured the governor that Rivers Women will stand with him all through the electioneering period up to his re-election.

Spokesperson for Rivers South-East Women, Mrs Charity Demua declared that the women have experienced good governance under the leadership of Governor Wike, saying that they will reciprocate by re-electing him. 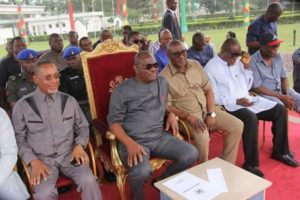 Mrs Macetelli of Rivers West and Mrs Carol John of Rivers East stated that the infrastructural development have had positive impact in the lives of women and their businesses.

In his response, Rivers State Governor, Nyesom Ezenwo Wike said that the all Nigerians irrespective of gender have a solemn responsibility of ending the failed APC Federal Government in 2019. 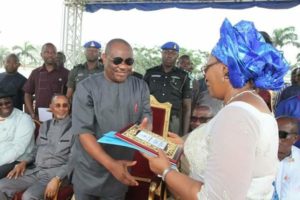 He said that the nationwide breakdown of security, especially in APC states, exemplifies the failure of the incumbent administration to productively manage national resources.

He said: “Nigeria is in crisis. Never in the history of this country have we had crisis of this magnitude. Rather than resolve developmental challenges, they continue to give excuses for their failure. 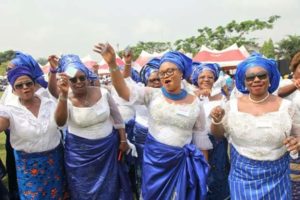 “We must come together in 2019 to protect our votes. Supporting APC is like digging our graves. The country is already dead under their control. Everyday, the country is moving from one problem to another. ”

The governor stated that APC leaders from the state take pride in de-marketing and destroying the economy of the state for political reasons .

He charged Rivers Women to jealously protect their permanent voters cards as that is the only weapon to uproot the APC in 2019.

Governor Wike announced a business development scheme worth N500million for Rivers Women in 2018. He said the fund will be domiciled at the State Microfinance Bank and managed by the Ministry of Women Affairs.

He said the empowerment scheme will assist the women develop small scale businesses. The governor also stated that the State Women Development Centre will be completed in 2018.

Highpoint of the occasion was the presentation of gifts by the women to the Rivers State Governor.