……………..In a show of love and care to his kindred in tune with the spirit of Christmas, the Chairman Governing Council, College of Education, Afaha Nsit, Deaconess Regina Ikpatt, on Wednesday, December 20th, 2017 distributed food items, rappers and cash gifts worth hundred of thousands naira to his Afaha Offiong and Ikot Obio Etan people making Mbiaso Ward 1, Nsit Ibom Local Government Area in a Christmas party. 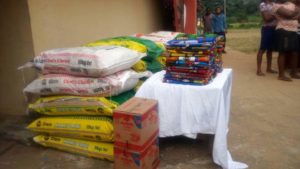 The event which was tagged CHRISTMAS GET-TOGETHER AND END OF THE YEAR PARTY was witnessed by ‘who is who’ in political, and social stratum in Mbiaso ward 1, as handfuls of entire women gathered at PDP party secretariat, Afaha Offiong for the exercise.

Setting the ball rolling, Mr. Otu Etuk, PDP ward Chairman, thank the women who turned out despite the short notice and by always standing by the party, and that the able Chairman Governing Council College of Education Afaha Nsit is here to thank them for the job well done during the elections, also to empower and celebrate Christmas with them in the spirit of Christmas. 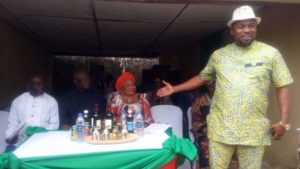 In her welcome remark, the host of the event, Deaconess Regina Ikpatt, said that the Christmas Get-together and End of the year party exercise is an event which affords her the opportunity to fete and share the goodness of God upon her life with people of his community, especially the less privileged ones. 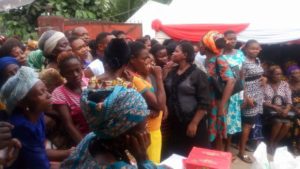 In her words, “let me first and foremost thank His Excellency Governor Udom Emmanuel, and our mother, Eka Unwana Akwa Ibom State for the opportunity given to me to serve the people in this capacity, my beautiful women thank you for coming out to participate in the party, let me also use this opportunity to thank all of you who came out to endorse PDP and all his candidates in the just concluded 2nd December, peaceful and fair local government elections conducted by Akwa Ibom State Independent Electoral Commission. we are here to extend the hand of fellowship of His Excellency Governor Udom Emmanuel in the spirit of yuletide period and to show genuine love to our people. “ 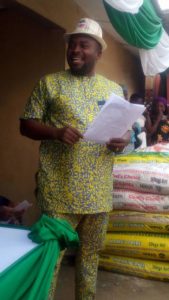 Also speaking, Hon. Eric Akpan, Executive Chairman Nsit Ibom Local Government Area thanked Mrs. Regina Ikpatt, whom he said has came in to politics and learn very fast. Today I stand here to say with this gesture in 2019 the ground will be soft for Udom Emmanuel, and intimate the women beneficiaries of more empowerment from his government. 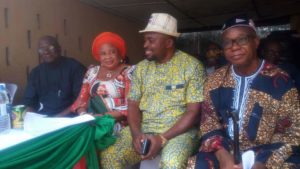 Personalities at the event also poured encomiums on the Chairman Governing Council, College of Education Afaha Nsit for the gesture and endorse His Excellency Governor Udom Emmanuel for Second Term in office.

In the highpoints of the event, ten thousand naira each were issued to two less privileged women drawn ten units, presentation of one set of rapper each to three women from the ten units, while bags of rice, cartons of ingredients were distributed to the entire women of the area. While PDP women unit canvassers thrilled to the guest in song presentation titled : kini Ukpong mi etide ofuri mfon mfo ette.